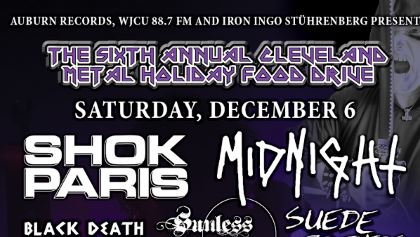 The billing is as follows:

Fans attending the concert are encouraged to bring non-perishable food items and/or cash donations to help those in need this holiday season.

A donation will be made from the Cleveland metal community to the Greater Cleveland Food Bank, Friends Of The Cleveland Kennel and Lake Humane Society.

"We've raised over 8,700 lbs. in food and $7,500 in cash donations during the first five years of our food drive", says event organizer Bill Peters (Auburn Records, WJCU). "Those are some incredible numbers!

"What started off in 2009 as a small one-time food drive attached to my Auburn Records 25th-anniversary concert has taken on a life of its own. It is truly amazing how much we have grown each year.

"Our donation totals keep increasing despite the challenging economic times we continue to endure in this region.

It's been a total grassroots effort. We have no corporate sponsorship or financial backing.

"Heavy metal fans are some of the most generous when it comes to supporting good causes. Working together, we've made our community a better place to live by helping those less fortunate during the holidays.

"It feels good to give something back.

"I can't thank the fans and everyone involved with this event enough for their support to our cause."

Iron Ingo Stührenberg is a writer for the popular German underground heavy metal webzine Metal Rules. He has traveled to Cleveland from his home in Wiesmoor, Germany at his own expense, to host two of the previous food drive benefit concerts in 2009 and 2010. His first visit to Cleveland was in 2009.

"It will be great to get back to my second home Cleveland to host the food drive festival!", says Ingo. "I ́m thrilled, happy and thankful to be involved in taking part again for the good cause to make a difference when we shout out again our message to the people: JUST GIVE A LITTLE BIT TO HELP A LOT!"

"We stacked the lineup with some of Ingo's favorite Cleveland metal bands in honor of his return to Cleveland this year", says Peters. "We'll have two stages delivering eight hours of continuous heavy metal."

"The band lineup Bill has put together is absolutely great!" adds Ingo. "That always was a magic part of the city of Cleveland. A lot of talented bands and lots of clubs to perform. It ́s really cool to have MIDNIGHT on the band lineup, for example. It will be the first time for me to see them live. They are very popular here in Germany. It's really crazy. Athenar (MIDNIGHT vocalist/bassist) was asking me about a rare vinyl he's looking for and I do have it in my collection. I will bring it with me and give it to him for playing the show.

"You know, it really is worth mentioning too, because he won't do so himself, just how well Bill organizes and promotes everything for this event every year. His shows have a reputation for always being very well-organized and running on time. He makes it looks so easy but in reality it's a lot of work for him and his crew. People have no idea how much of his own time and money he donates behind the scenes to make this food drive a success. He's one of the hardest working, caring and humble guys I know. He is always going out of his way to help people, and animals too. I am proud to call him my friend.

"I arrive in Cleveland on November 26 and will stay until December 15. My motto for this trip is 'Back For The Attack!' I hope to see all my friends at the show, along with many new faces as well. It's important we reach our goal and top last year's donation totals.

Fans not able to attend the food drive can make an online cash donation via PayPal to Auburn Records ([email protected]). Be sure to indicate which charity organization you would like your funds allocated. If nothing is indicated, your donation will be divided equally between the three.

The Greater Cleveland Food Bank supplies a majority of the food used in local hot meal sites, shelters, and food pantries. In addition, they provide food to child care centers, group homes, and programs for the elderly. The Food Bank works closely with other Northeast Ohio hunger relief organizations, providing food and nonfood products to hunger centers administered by the Hunger Network Of Greater Cleveland, the Catholic Hunger And Shelter Network, and the Salvation Army, among others.

The City of Cleveland Kennel is the most overlooked animal facility in the Cleveland area. It is often confused with the APL or County Kennel, but is an entirely separate facility.

Most of the animals that arrive at the kennel have been abused or neglected. These animals are all very special, but they have not been the given the life that they deserve. It is the goal of the Friends of the City of Cleveland Kennel to provide them hope for a new beginning.

The mission at Lake Humane Society is to provide a gentle and caring haven for the homeless, abandoned, and injured animals of Lake County and persevere in defending and protecting animal life through education, integrity, and leadership. Healthy and adoptable animals stay with them or in foster homes until they are adopted. The staff works with the community to rescue homeless animals, promote adoption, education and advocacy for animals in need. They do not receive any government funding nor are they funded or operated by any national humane organization. They rely solely on contributions from individuals and local businesses that care about animals and their service to the community. 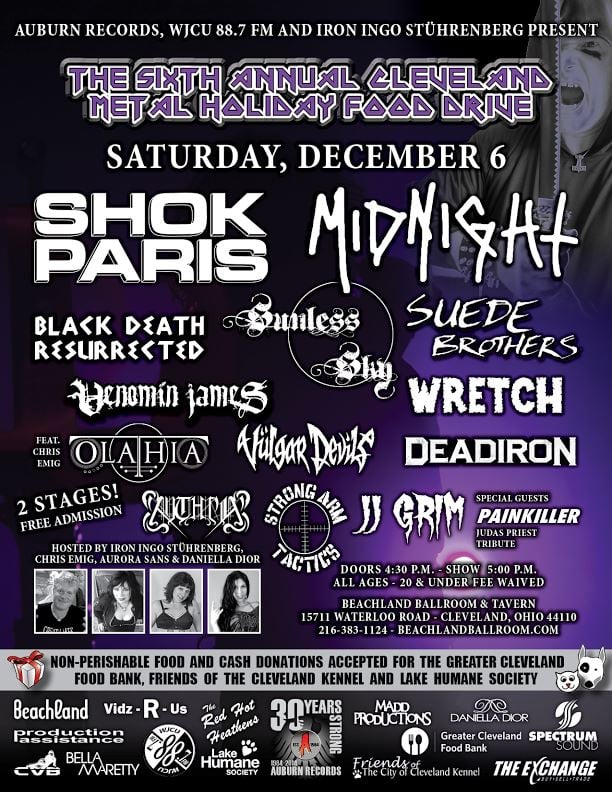