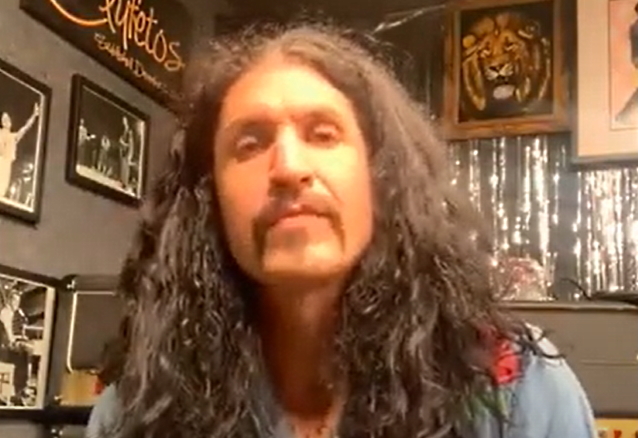 In a new interview with Rocking With Jam Man, BLACK SABBATH's touring drummer Tommy Clufetos was asked if he thinks the band's original drummer Bill Ward should have joined the rest of the group on stage for a song or two during the final show of SABBATH's "The End" tour in February 2017 in Birmingham, England. He responded (as transcribed by BLABBERMOUTH.NET): "I'm the last guy in the world who has any idea of what goes on there, so I can't say 'should he?' [or] 'shouldn't he?' 'cause I don't know what was really going on. All I know is that I was asked to play drums. So I don't really concern myself with things that aren't in my control. That's between him and the band. So you're asking the wrong guy the question, 'cause I'm just a drummer and I keep my mouth shut."

Clufetos went on to say that "it was a wonderful feeling" to be asked to play with SABBATH on the band's last-ever tour. "And it was even more wonderful, and it was an honor and a privilege to go on stage and be the guy [who was asked] to carry the torch to bring the music to the fans," he said. "And I really tried hard, my best that I could, to do justice to the great music that they created together — the four guys: Ozzy [Osbourne], Tony [Iommi], Bill and Geezer [Butler]. So I just tried to revere the music and bring the same vibe that the fans were expecting. And I was proud of what I did with those guys onstage. So it was a thrill and an honor for me."

Asked what emotions he felt while playing SABBATH's final show ever, Tommy said: "That whole tour was great. And the last gig of any tour is always a little more unnerving — people are packing their bags, and there's distractions, let along playing with BLACK SABBATH in their hometown of supposedly their last gig that they're ever gonna do. So there was a lot of hustle and bustle going on. But we provided what was necessary on stage that day, and they were recording it, and they filmed it. And it was a great night."

Two months ago, Ward said that he no longer has physical capability to perform live with BLACK SABBATH but he would love to join them in the recording studio. He told SiriusXM's "Trunk Nation With Eddie Trunk": "As far as touring with BLACK SABBATH, I don't have the chops, and I don't have the ability to drive a band like that on stage. I have to be back to 60 years old to be able to do that."

Ward continued: "I would love to do a studio album with SABBATH, with all the original members. I'm just saying that — I'm just floating that out there. I haven't talked to anybody about that or anything else. But I'm not done. So, the other three might be done, and I respect that, but no, I'm not done. I think as long as we all exist [laughs] and we're still breathing in air, I think we have every possibility of making some great music together."

Bill went on to reiterate his desire to make a new studio album with BLACK SABBATH but confirmed that he no longer wishes to play live with the legendary heavy metal act.

Bill was on board for the SABBATH reunion when it was first announced nine years ago, but backed out soon after. The drummer later claimed that he sat out the recording and touring sessions because of unfair contractual terms, although the members of SABBATH have hinted in other interviews that he wasn't physically up to the task.

All four original members of SABBATH were present when the band announced its reunion in late 2011. But Ward split from the group in 2012, citing an "unsignable" contract, and Osbourne, Iommi and Butler carried on with their Rick Rubin–produced "13" LP and extensive international touring without him.

Clufetos's new band TOMMY'S ROCKTRIP, where he offers his take on the rock 'n roll influences that made him one of the most sought-after drummers in the current hard rock scene, will release its debut album, "Beat Up By Rock 'N' Roll", on May 7 via Frontiers Music Srl. Eric Dover, known for singing and playing guitar with JELLYFISH, SLASH'S SNAKEPIT and Alice Cooper, handles lead vocals on the LP (though Tommy grabs the mic for three tracks). Eliot Lorengo (bass),Hank Schneekluth (guitar) and Nao Nakashima (guitar) round out the supporting cast.