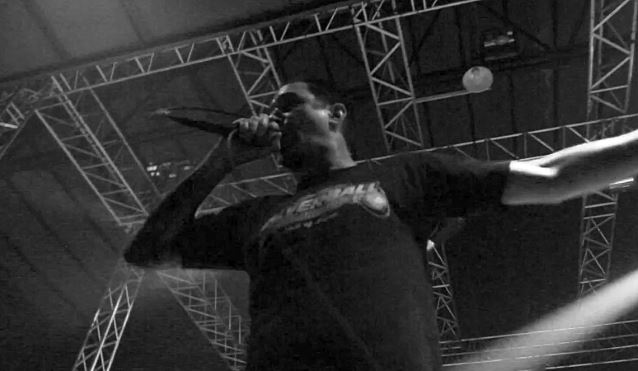 SICK OF IT ALL: 'Get Bronx' Video Premiere

"Get Bronx", the new video from New York hardcore legends SICK OF IT ALL, can be seen below. The clip was filmed by Dirk Behlau in Europe earlier this year during the EMP Persistence Tour.

Says SICK OF IT ALL drummer Armand Majidi about the song and video: "'Get Bronx' is a hard-hitting groove with a message of defiance against the modern powers of oppression.

"This video serves to show people across the world that, as gritty and unpretentious as hardcore music is, it still translates to the big stage and doesn't need a tiny, intimate atmosphere to work. When a big club pulsates like that, the spirit of hardcore is kept alive."

On April 5, SICK OF IT ALL will begin another European run, with support from ANGEL DU$T, right after playing three U.S. shows.

SICK OF IT ALL's new album, "The Last Act Of Defiance", was released in Europe, Australia and New Zealand on September 29, 2014, and in North America on September 30, 2014 via Century Media. The eye-catching cover artwork for the CD was created by Ernie Parada, who has already designed posters, merchandise and album art for numerous bands and artists from the punk and hardcore scene such as HATEBREED, PROPAGANDHI, RANCID and THE GASLIGHT ANTHEM.