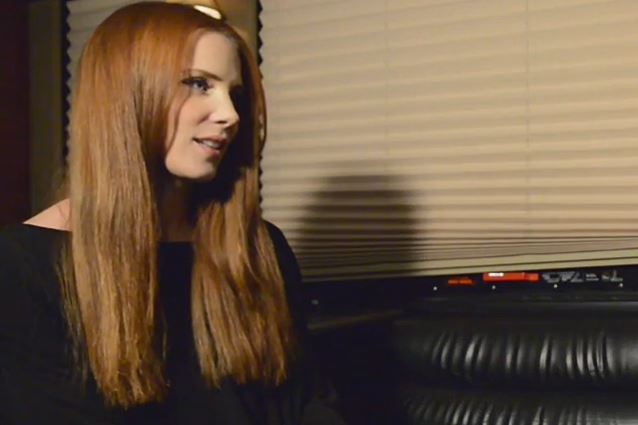 Mike Bax of Lithium Magazine conducted an interview with vocalist Simone Simons of Dutch symphonic metallers EPICA on November 6 in Toronto, Ontario, Canada. You can now watch the chat below.

Asked if she would agree with the opinion that EPICA has gone from being a symphonic band with metal elements to a metal band with symphonic elements, Simone said: "I think with the arrival of the other three bandmembers that are with us for quite a long time — I'm talking about our drummer, Ariën [Van Weesenbeek], our guitarist, Isaac [Delahaye], and our bass player, Rob [Van Der Loo] — they've been contributing to the songwriting. And Ariën and Isaac come from a band called GOD DETHRONED, and that's really heavy, so you hear their influence. And in true essence, EPICA is a metal band, and the orchestration, for me, is as important as the metal aspect. Some bandembers have a different opinion on that. That's six people with six opinions together. But I think that now the guitar riffs are way more prominent, but the thing that I've always loved about EPICA is the orchestration, so I'm very happy that that's kind of, you know, at the same spot."

Regarding whether EPICA's musical evolution was a natural progression or the result of a conscious effort to move the sound into a heavier direction, Simone said: "A combination of both, I guess — just a natural development of having all five guys writing songs. They all come from different corners within the metal scene, have different musical preferences. And if a song is good, it's good. Of course, we won't release a rap-metal album or something like that, but if it fits within EPICA, then it's great. And we also have a producer, Joost [Van Den Broek], who tries to keep everything under one hood, [so to] say, to really morph the songs into the EPICA sound, if they deviate too much. But all 27 songs we had for [the new EPICA album, 'The Holographic Principle'] got a fair chance at demo sessions, and of those, we picked 18 songs."

"The Holographic Principle" was released on September 30 via Nuclear Blast.