Another new SINNER track, entitled "Heart Of Darkness", has been posted on the group's MySpace page. The song comes off the veteran German metal oufit's new album, "Crash & Burn", which is scheduled for a September 19 release via AFM Records. The CD was produced by Mat Sinner and Henny Wolter at the House Of Music studios features guest appearances by Dirty Sanchez (percussion), Dennis Ward (backing vocals, percussion) and Nena (backing vocals). The limited-edition digipack version of the album will include two bonus tracks — "One Night Only" (written by Mat Sinner and Magnus Karlsson) and "Fast Decision 2008" — and the video for the song "Revolution", which was directed by SINNER's longtime collaborator Katja Piolka in Stuttgart, Germany. According to a press release, "Fast Decision 2008" was "created under bizarre circumstances, as AFM Records A&R representant Markus and drummer Klaus forced Mat in the studio, to record a new version of the forgotten jewel again. Mat was irritated about their sick idea first, but after some shots of booze, Mat agreed to sing this song for one last time."

The final track listing for the CD is as follows:

The limited digipack edition will feature two bonus tracks ("One Night Only", "Fast Decision 2008") and the video for the song "Revolution".

A report on the "Crash & Burn" listening session from UK's Powerplay magazine can be found at this location. 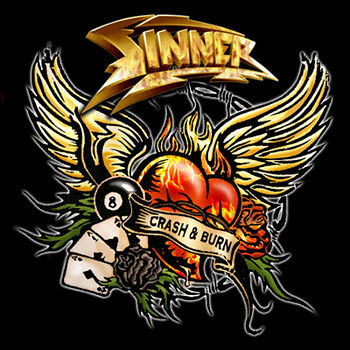