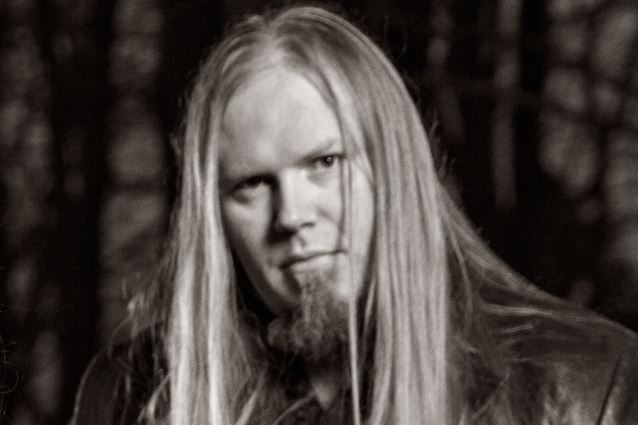 SIRENIA To Release 'Dim Days Of Dolor' Album In November

Norwegian-based symphonic gothic metal veterans SIRENIA have set "Dim Days Of Dolor" as the title of their upcoming album. Due on November 11, it consists of eleven brand new songs plus one bonus track. The artwork was once again created by Gyula Havancsák from Hjules Illustration And Design. All recordings have been completed and the album is currently being mixed at Hansen Studios in Denmark.

Commented SIRENIA mastermind Morten Veland: "It is always a great feeling to have completed a new album.

"With eight SIRENIA albums under the belt, some people ask me if it is difficult to keep up the enthusiasm at this point. But that's not problematic at all; I have never been so enthusiastic about any album before.

"With this album, we have reached new heights that seemed out of reach in the past.

"I feel that the countless hours we have put into this album really have paid off in the end. This album is also the most diverse album we've done to date, also the performances has never been better.

"I can't wait to share this album with all the SIRENIA fans and metalheads out there. This album will mark a special point in the band's career, I am sure."

SIRENIA recently parted ways with their Spanish singer Ailyn Giménez García for "personal reasons." The band said in a statement: "We part ways on good terms and we wish Ailyn the best of luck for her future endeavors. Thanks a lot for the great years we shared in the band and thanks for all your efforts in this period; we are forever grateful. It has been a true delight and privilege working with you. May all your dreams be fulfilled and may your future shine."

The new SIRENIA singer will be officially announced on September 8.

SIRENIA was forced to cancel a recent concert in the Czech Republic after Ailyn's mother died, "a tragic event that had an impact on Ailyn's health as well," the band explained. Another show in Kherson, Ukraine went ahead with the help of a session singer, Emmanuelle Zoldan, who had contributed guest vocals to every SIRENIA album since 2004.

Ailyn released a statement to BLABBERMOUTH.NET in which she said that her exit from SIRENIA was not her decision.

Ailyn (born: Pilar Giménez García) joined SIRENIA in 2008 as the replacement for Monika Pedersen, who left the group a year earlier after only one album due to "musical differences."