According to Billboard.com, the Revolver Golden Gods awards show presented by Epiphone, America's only hard-rock and heavy-metal awards show, will return to TV on Saturday, May 24 via VH1 Classic at 8 p.m. ET/PT, produced by Dick Clark Productions and Revolver magazine. The four-hour live show will tape Wednesday, April 23, at Los Angeles' Club Nokia, and stream at VH1.com and on VH1's mobile app, with a black carpet hosted by TWISTED SISTER frontman Dee Snider. The May 24 telecast will be an edited, 90-minute version of the show.

This year marks Dick Clark Productions' first time producing Revolver Golden Gods, with executive producer Assaf Blecher telling Billboard.com: "We are very into music properties, so it's just natural that the Golden Gods would make sense for us. The show is a good combination [of older] and newer heavy-metal icons, and it's a great occasion for the community to come together for a one-night only event."

This year's Ronnie James Dio Lifetime Achievement Award will go to hard-rock legend and GUNS N' ROSES frontman Axl Rose, with Rose taking his place in the Revolver Golden Gods hall of fame alongside such previous honorees as METALLICA, RUSH, MÖTLEY CRÜE, Lemmy Kilmister of MOTÖRHEAD and Ozzy Osbourne. GUNS N' ROSES are one of the most celebrated acts in music history with sales of more than 100 million albums worldwide and continue to tour annually, headlining sold-out stadium shows and festivals across the globe.

Iconic rocker Joan Jett will be the recipient of the Golden God Award, given each year to one special honoree that embodies the spirit of hard rock and metal. The legendary axewoman, singer, songwriter and performer makes her mark in Golden Gods history as the first female to receive the coveted honor alongside such previous winners as Rob Zombie, Alice Cooper and Gene Simmons. Jett's latest album, "Unvarnished", surged into the top 50 on The Billboard 200 upon its 2013 release and features the hit single "Any Weather".

"No one deserves this award MORE than Joan Jett. She's never compromised who she is — she's a rocker through and through," commented 2011 Golden God Award winner Alice Cooper, who will present Jett with the award at this year's show. "I wish some of the younger bands had the balls that Joan Jett does!"

Both honorees will take the stage for special performances as part of the 2014 Revolver Golden Gods awards show, with Rose being joined by GUNS N' ROSES and Jett appearing with THE BLACKHEARTS. Heavily nominated for their 2013 release "The Paradigm Shift", former "Album Of The Year" winners KORN will also make their return to the show to perform. Additional performers included on this year's show are A DAY TO REMEMBER, Zakk Wylde and THE PRETTY RECKLESS, with more acts to be announced. Appearances will include Dave Navarro, Orianthi, Ace Frehley, Scott Ian, Jamey Jasta and Chino Moreno. The crowd at Club Nokia and viewers at home can expect the show-stopping moments the Revolver Golden Gods awards show has become known for, along with surprise guest appearances and once-in-a-lifetime collaborations.

"I am very honored that Revolver is renaming the 'Best Guitarist' award after Dime! He was and always will be what heavy-metal guitar playing is all about," said Vinnie Paul Abbott, brother of Dimebag and his bandmate in PANTERA and DAMAGEPLAN. "This award is given to the person with those special skills that sets them apart from others. Dime always went for it and I know he would be proud of the winner of this award. So go for it and may the best shredder win! GETCHA PULL!!"

In addition to his performance at the Golden Gods, Zakk Wylde and his band BLACK LABEL SOCIETY will make their way across the country as headliners of the 2014 Revolver Golden Gods Tour. Supporting the upcoming April 8 release of their new album "Catacombs of the Black Vatican", the band will kick off the tour April 16 in Seattle and continue on the road through the tour finale in Los Angeles on June 7. Joining BLACK LABEL SOCIETY on the trek are supporting acts DOWN (on select dates),DEVIL YOU KNOW (featuring former KILLSWITCH ENGAGE vocalist Howard Jones) and BUTCHER BABIES.

The full list of nominees for the 2014 Revolver Golden Gods awards presented by Epiphone are:

Album of the Year

Comeback of the Year 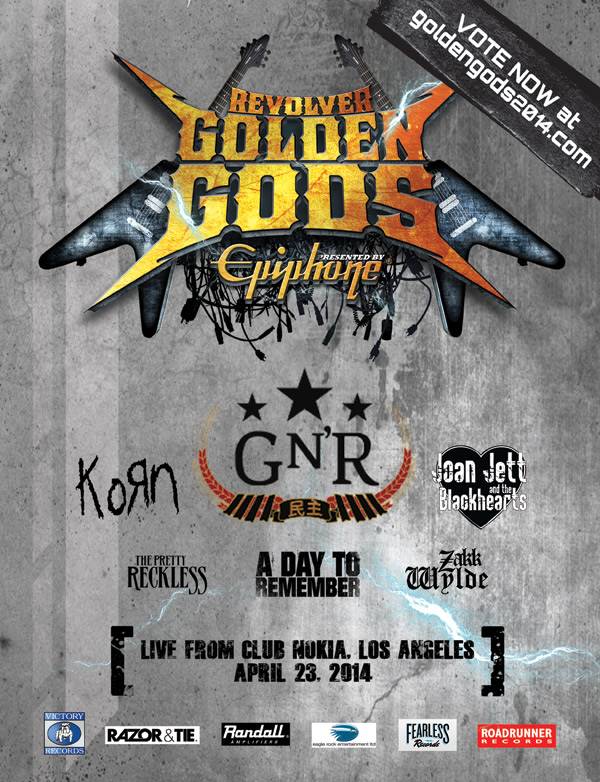