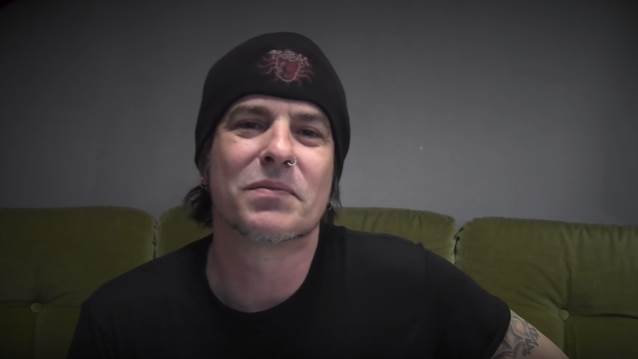 SKID ROW bassist Rachel Bolan was recently interviewed by Barbara Caserta of Linea Rock. The full conversation can be viewed below. A few excerpts follow (as transcribed by BLABBERMOUTH.NET).

On the status of the group's in-progress new album:

Rachel: "We're still writing. We're writing a lot of songs, because it's going to be a full-length this time. We're just writing a bunch of songs, and in June, we're going to start pre-production with Michael Wagener. We're very excited about it, and we're hoping for an early 2019 [release].

On the decision to make the final chapter of the "United World Rebellion" trilogy a full-length album rather than an EP:

Rachel: "Since ZP [Theart] joined the band, it's brought a new energy, and we've been writing a lot. We've been writing with different people, and everyone's very excited about it. We're like, 'It's his first album with the band, of many, so we want it to be a full-length.'"

On whether changing vocalists twice in recent years delayed the conclusion of the "United World Rebellion" trilogy:

Rachel: "It's kind of the reason, but not completely. Once we got it in our heads that we were going to do a full-length record, we decided, 'Well, let's take our time, and let's write a bunch.' If they're only 10 [songs] on there, that means we're going to write 30 and pick 10 out of 30. We are too selective sometimes with songs, but we're definitely not lazy this time. We don't want to rush it."

On the fact that the band has only released five albums in their 30-year career:

Rachel: "We take our time. We take a long time to write, and we tour so much that that kind of interferes with writing sometimes. I noticed that a lot of bands that came out the same time we [did] have twice as many records, but we don't want to just put out records to put out records. We want to make sure that we're 100 percent happy with them and [that] it gets our stamp of approval. We feel pressure from the fans, which is good, because they're excited about hearing it, but we put a lot of pressure on ourselves. It was a lot easier when we all lived 20 minutes from each other. Now, we live in different states, and ZP lives in another country altogether. It takes a little bit of planning now to get together, and that makes the process a little more difficult."

On whether he thinks Theart will be the group's long-term frontman:

Rachel: "Absolutely. [Drummer] Rob Hammersmith and I were going to do a side project with ZP right after he left DRAGONFORCE. Just the distance and schedules, we could never make it happen. When we parted ways with Johnny [Solinger], actually the first choice was ZP, and he had stuff going on with I AM I, and it just, in our heads, it's, like, 'How do we do this? He's on the other side of the planet.' Then we went with the other guy, and it didn't work. As soon as that fell through, ZP was our first phone call, and we made it work."

On the difference between parting ways with Solinger and with Sebastian Bach:

Rachel: "Neither of them were very tough because we knew it was going to happen sooner or later, so it was a pretty easy transition."

On if he's read Bach's autobiography:

On whether he has any interest in writing one himself:

Rachel: "I've been working on memoirs — just a little bit here, a little bit there. I'm not in any rush. I think I've got a lot of touring left in me. I'm just putting funny stories, positive stuff. I didn't do drugs, I didn't end up in rehab and I invested my money, so I don't have that typical 'rock star' story. It's just funny that happened, great people that I've met. Eventually, I'll get around to it."

On the most underrated SKID ROW song:

Rachel: "I would say probably 'Disease' off of 'Revolutions Per Minute', because I know a lot of dudes like that song, especially over here [in Europe], and they always ask if we're going to play it. We used to play it in the States, and people didn't know the song, but over here I have a feeling that they would. I love that song."

On the best tour the band has ever done:

Rachel: "Honestly, this year, the shows we've done in the States as well as the U.K. and Europe, we've had so much fun. Coming over in the spring makes such a big difference in Europe than when it's raining all the time. We've just had so much fun as a band. The other day, we had two days off, so we all flew to Venice — the five of us — and just ate and had fun, drank wine and just walked around. That's stuff that never really happened with this band before, where all five guys stayed in the same place at the same time. It's pretty cool. Touring with KISS was amazing, growing up as a KISS fan. Touring with TESLA was fun, and this tour, the U.K. and Europe, it's definitely in my top three without a doubt."

On the high and low points of SKID ROW's career:

Rachel: "There's been a lot more high points than there's been low points. I think the lowest point was, 'Slave To The Grind' came out, we went number one, things happened really big for us, and then everything just started to slide. Why it happened, I have no idea. It became a point where I didn't want to do it anymore, and I just got so sick of the bullshit that was going on that I couldn't care less. High points, we played the Polish Woodstock — 600,000 people. That was pretty amazing. That was pretty great."

SKID ROW has collaborated with several other artists, including members of SLIPKNOT and HALESTORM, on the songwriting process for the final installment of the band's "United World Rebellion" trilogy.

Despite having played sporadic shows with SKID ROW for a year, Theart wasn't officially announced as the band's new vocalist until January 2017.