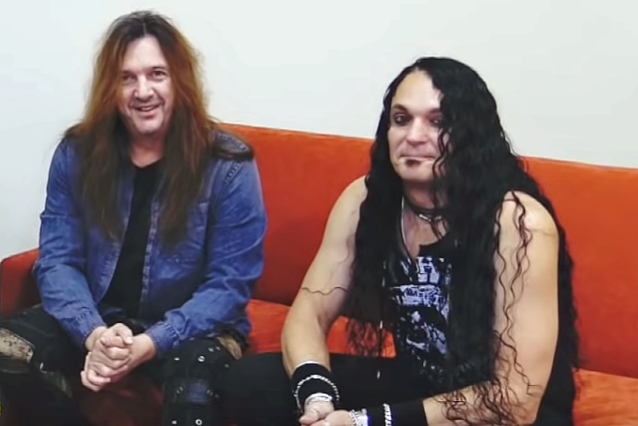 SKID ROW Guitarist On New Frontman ZP THEART: 'He Can Sing Anything'

SKID ROW guitarist Dave "Snake" Sabo and singer ZP Theart spoke to "In the Vault with Shanda Golden" about the band's upcoming final installment of its "United World Rebellion" trilogy. Tentatively due next year, the effort will feature collaborations with several outside songwriters, including Corey Taylor (SLIPKNOT, STONE SOUR) and HALESTORM's Lzzy Hale and Joe Hottinger.

SKID ROW's new album — which, unlike the first two chapters of the "United World Rebellion" trilogy, will be a full-length recording — will see the band reunited with famed rock/metal producer Michael Wagener, who worked on SKID ROW's first two albums, 1989's "Skid Row" and 1991's "Slave To The Grind", as well as 2006's "Revolutions Per Minute".

Sabo told "In the Vault with Shanda Golden": "[Michael has] been so instrumental in bringing the best out of who we are as musicians and as a band as a whole. And I'm really excited to see him work with ZP, and we've had the opportunity to go in and do some pre-production already in between touring. And I can see Michael zoning in, and it's gonna be really great to see what happens between the two of them, 'cause Michael has an innate sensibility of being able to pull out things within you that you didn't know that you had."

Asked if SKID ROW's upcoming album will include a full-on power ballad in the vein of "I Remember You", Snake said: "I don't know. We're still writing for it. We have a bunch of stuff written. I think it'll all come out when we get into the studio. Because one of the things that we've maintained is that we don't have any limits on ourselves. And why? Especially with Zee being in the band now, he can sing anything, so you don't have to worry about throwing something in front of him and going, 'Oh, man. I hope he can hit that note,' or whatever — there's not a worry about that. So you're able to just sit there and go as far as you wanna go. Like, we were just in the studio a couple of days ago demoing up some stuff, and there's a tail end of a song when he just starts going off, and you're going, 'Wow!' It's so great to be able to have a situation where you don't have to worry about giving somebody something or approaching someone with an idea and have it not be doable. It basically comes down to, yeah, he can do it. It's [about], do we all like it or do we not like it? So it's not about execution — it's about whether the idea works or not. And that's really a great space to be in."

The South African-born, British-based Theart was in DRAGONFORCE, TANK and I AM I before playing his first gig as SKID ROW's vocalist more than two years ago.