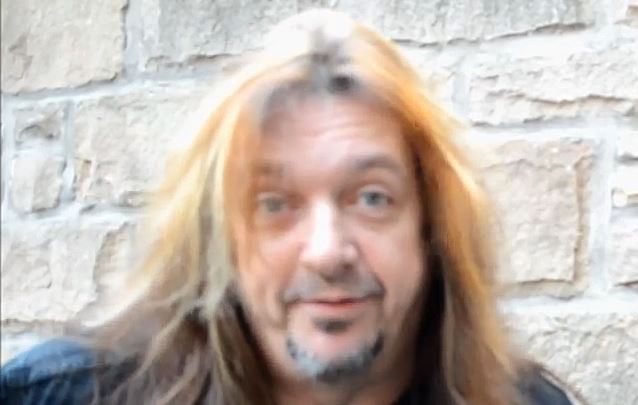 SKID ROW To 'Do Some Writing' For Next EP In January

Rock N Reel Reviews conducted an interview with SKID ROW guitarist Dave "Snake" Sabo during the band's recently completed UK tour. You can now watch the chat below. A couple of excerpts follow (transcribed by BLABBERMOUTH.NET).

On SKID ROW's plans to release another EP to follow up this year's "Rise Of The Damnation Army - United World Rebellion: Chapter Two":

Sabo: "This one will be a set of three [EPs], so we'll start working on it… We'll do some writing in January. We've done some writing already. We consciously made a point not to write everything all at once. We wanted everything to maintain that urgency and that immediacy and have the music be 'in the moment' at that particular time where we're at. And this way allows us to use the life experiences that we've gone through while touring the world and to apply that to the music as well."

On whether there is a common thread running through all the EPs:

On how SKID ROW's newest material is going over live:

Sabo: "We're doing two [songs] off the first EP and two off this EP. And it's cool because they have a great energy to them, and so I think if people aren't necessarily familiar with all the lyrics or the songs themselves, there's an energy and a groove that goes along with them that allows people to, sort of, navigate toward and get close to it, even if it's unfamiliar from, like I said, a lyrical perspective or something like that. It's like if you never heard [LED ZEPPELIN's] 'Immigrant Song', that groove forces you to get into it. It seems that the vibe and the groove and the tempos of the songs are grabbing the people."

"Rise Of The Damnation Army - United World Rebellion: Chapter Two", the new EP from the current lineup of SKID ROW — Johnny Solinger (vocals),Scotti Hill (guitar),Rachel Bolan (bass),Dave "Snake" Sabo (guitar) and Rob Hammersmith (drums) — sold around 1,300 copies in the United States in its first week of release. The CD, which came out on August 5 via Megaforce Records, contains covers of QUEEN and AEROSMITH classics as bonus tracks.