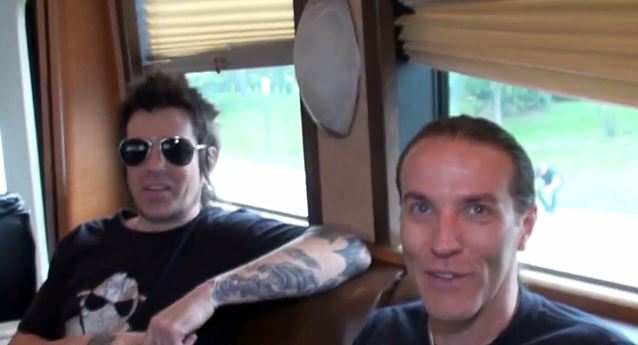 Each episode of "Tour Tips" features a touring act sharing five pieces of advice for artists who want to hit the road. In this episode, which was filmed on July 12, 2014 in Arlington Heights, Illinois, Rachel Bolan and Rob Hammersmith of SKID ROW share their tips for surviving on the road.

As previously reported, SKID ROW has re-recorded its classic song "18 And Life" with Harnell.

"The re-record was not to try to outdo the original, it wasn't to try to in any way replace the original version, at least from my standpoint," Tony told "The Classic Metal Show". "I don't know what their idea was. From my standpoint, it was… They asked me to do it, and I thought it was an interesting idea as a way to introduce me to the fan base. And I did my best to stay true to the original, which is what they wanted. I probably would have strayed more, if I could have, and done more Tony Harnell doing the song. But, you know, I tried to stay as true as I could to the original version."

He continued: "This was recorded from scratch. This is a complete re-record. And, in fact, they purposely used the same exact gear, so all the amps, all the guitars, as far as I know, were exactly the same. The only difference is Rob Hammersmith is the new drummer… is the current drummer, I should say; he's not new anymore. So other than the drums, the guitars and the bass are all original, same exact gear — same amps and guitars, as far as I know, is what I was told. They did a great job duplicating, and they wanted to duplicate as closely as possible to that original version."