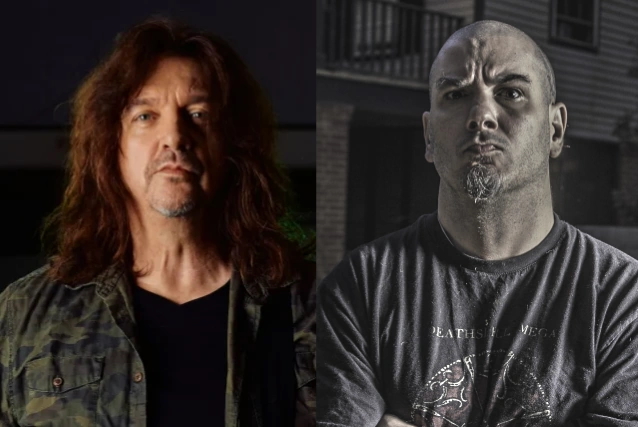 Regarding how he first came to manage DOWN, Sabo said (as transcribed by BLABBERMOUTH.NET): "Rex Brown [former PANTERA and DOWN bassist] came into the office and said that Philip and him and Pepper [Keenan, DOWN guitarist] were putting DOWN back together. [He said,] 'And we wanna know if you're interested in managing it.' And I'm, like, 'No.' [Laughs] I go, 'You guys are my friends — and really good friends.' And I go, 'The only way that I would do it is if we ever saw a time where our friendship was being destroyed, we'd have to walk away from each other to somehow preserve that friendship.' And so we started working together. And we still do. [Laughs] Rex is no longer with the band — he's gone on to do his own stuff — but we still work together. And it's really been such a great life experience to work with friends."

He continued: "Philip has been my buddy since [PANTERA] toured with [SKID ROW] in 1992, and we've always maintained a really close relationship. We're the least likely of people to be really good friends, but yet we are. It's funny — he's so not a difficult person to work with or manage. [He's] very, very smart [and] very, very open to listening to alternative ideas and not completely set in his ways, like a lot of artists who have stamped their name on the music industry are. And he's been a pleasure. Same thing with Pepper Keenan and Kirk Windstein [DOWN guitarist] and Jimmy Bower [DOWN drummer] — they've been amazing. We've had so many great moments together. And hopefully they'll start working again soon. They've taken a three-year hiatus. And Philip's been doing PHILIP H. ANSELMO & THE ILLEGALS, and he did ARSON ANTHEM for a little while, and then SUPERJOINT for a little while. SCOUR, he's doing. So he's got a lot of stuff on his plate. And Kirk's got CROWBAR, and Pepper's got C.O.C., and Jimmy's got EYEHATEGOD and SUPERJOINT as well. So they've always had a lot of stuff going on, and DOWN has always been a band that would put out stuff and then walk away for a little while. And we always knew that, and that's just the way it's been. But I think that within the next year, they're gonna have some stuff coming up."

Last month, Windstein confirmed to "The Rock Savages" podcast that DOWN's next release will be an EP of cover songs. "'Cause we like fucking around with different stuff, and we're influenced by so many different styles," he said. "We've just gotta agree on six songs to do. We don't wanna do the obvious shit — we don't wanna do [BLACK] SABBATH and stuff like that — so we're trying to find some obscure stuff that fits our style."

Asked if some tracks have already been agreed upon, Kirk said: "Yes and no. The more we talk about it, the more it changes. So there's, like, 30 songs that have been mentioned. So, we'll see. But I'm looking forward to working on that. It should be a good time."

Plans for select shows featuring Anselmo, Keenan, Windstein, Bower and bassist Pat Bruders performing the record in its entirety were sidelined due to the global pandemic. In its wake, the band took part in the livestream.

Prior to "The Quarter Century Throwdown", DOWN's last live appearance took place in August 2016 at the Psycho Las Vegas festival in Las Vegas.