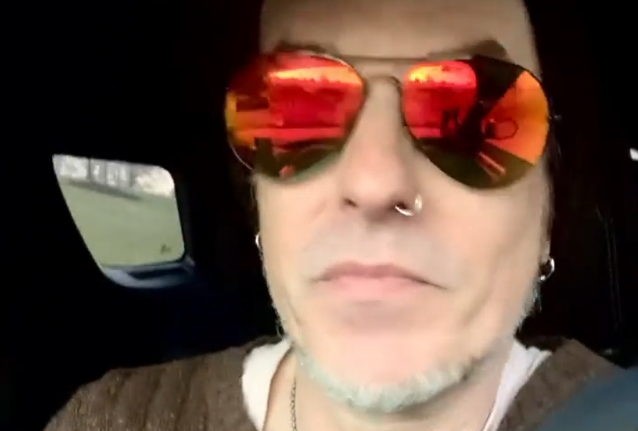 SKID ROW's Rachel Bolan says that he is "doing fine," a week after having his appendix removed.

The 55-year-old bassist was scheduled to play with his bandmates this past Saturday (January 29) at the Showroom at Talking Stick Resort in Scottsdale, Arizona but had to pull out of the gig after being diagnosed with appendicitis and undergoing surgery. He was replaced at the show by Robbie Crane, who has had stints with Vince Neil's band, RATT and LYNCH MOB, before joining BLACK STAR RIDERS as a full-time member.

Bolan took to his Instagram on Monday (January 31) to share a photo of him lying on a hospital bed and explain his absence from the Scottsdale concert, prompting an outpouring of concern from his fans. Just hours later, Rachel returned to Instagram to post a video message in which he thanked everyone for their support and assure fans he was "feeling awesome."

He said (as transcribed by BLABBERMOUTH.NET): "Man, I am so sorry. I freaked so many people out with my post. I am fine. Honestly, I posted just to let everyone know why I wasn't in the show, why I didn't do the show last Saturday. But I really didn't mean to worry anyone. That said, I can't tell you how much I appreciate the outpour of concern. It made me feel really good; it made an old guy feel good. But I am doing fine. Doctor's orders: can't lift anything over 20 pounds; don't go too crazy. And he just didn't want me flying on an airplane or bouncing around onstage because it was too soon after the operation. But the operation was routine, easy. I felt immediately better as I came to. Out of surgery, after I came to, I felt awesome. I still feel awesome and expect to keep feeling awesome. So it wasn't something super scary. But I apologize if I scared anyone or freaked anybody out but I'm fine. And I love you guys so much for showing your care and concern. So we'll be rocking as soon as our next show. So have a great week, and thank you again. I love you, guys. Be well and we'll see you out there."