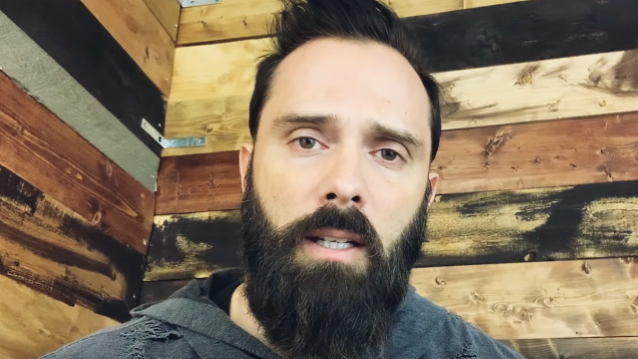 John Cooper, the frontman and bassist for the Grammy-nominated Christian rock band SKILLET, says that his comments about Cardi B and Megan Thee Stallion's performance of their hit song "WAP" during Sunday's Grammy Awards were "misrepresented."

On Wednesday, Cooper released an episode of his "Cooper Stuff" podcast in which he argued that being "forced to applaud" and "celebrate" the "sexual degradation" of Cardi and Megan's performance was a good example of how humanity has always been dexterous at confusing evil with good. To make his point, Cooper said that dictators like Adolf Hitler also claimed to be "liberators" while performing evil acts.

Earlier today, Cooper released a follow-up video message in which he clarified his original comments and insisted that he never compared Cardi B to Hitler or any dictatorship of any kind.

John said (as transcribed by BLABBERMOUTH.NET): "Yesterday in my podcast, I reacted to Cardi B's performance at the Grammys. And it has come to my attention that some of my words were misrepresented and taken out of context from their intent. So, please allow me to say this: I did not compare Cardi B to Hitler, and I did not compare her performance to Hitler or any other dictator, and I certainly didn't compare the Grammys or the music industry or any other artist, for any reason, to any dictator.

"Secondly, I wanna say this: I did not conflate the consequences or the gravity of Cardi B's performance at the Grammys. I in no way would ever conflate that to the horrors of the genocide that we saw in 1940 or any of the other violence and murders and all the death and destruction of any dictator that we've had in history. I honestly don't understand how it could be taken that way, but just to be clear and clear of any confusion, I was stating that we are living in a time when it comes to morality where we are redefining what is good and what is evil"

He continued: "Sometimes we have a hard time imagining that someone would do something bad and redefine it and call it good. That's why I was pointing out that there have been many, many examples of dictators or horrific events over the last 100 years where people did really, really bad stuff, but they believed or claimed that they were doing it for good reasons, for moral reasons, for liberating reasons. And as an example of that, I was saying if you were to go back and read some of Hitler's speeches, you would find that he claims to believe that he was liberating people and doing something virtuous. This in no way compared Cardi B to Hitler or any dictatorship of any kind, and it certainly wasn't conflating all of the evil things that have happened to the consequences of Cardi B's performance, or any other performance for that matter. I was speaking philosophically in order to make a point and then using an unequivocal example from the past where someone has traded evil but called it good.

"So I'd like to end this little five-minute talk with the same ending that I used on yesterday's podcast. This Grammy performance is a very small miscrocosm — it may seem trite; it may seem a little bit petty — it's just a microcosm to show something that is a lot bigger. I'm actually not trying to blow this up into a crisis. I'm actually saying we are in a crisis — but not because of the Grammys and not because of Cardi B and not because of a music performance or any other musician or artist or band. That's not why we are in a crisis. And what is the crisis? The crisis is this: we are redefining what is moral and what is immoral, what is virtuous and what is not virtuous, and it is going to have devastating consequences for America."