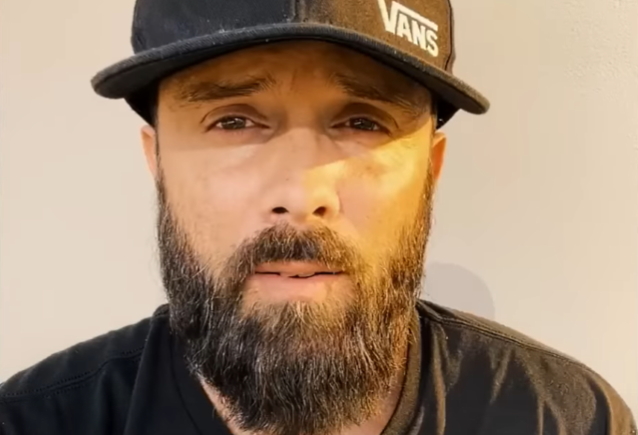 John Cooper, the frontman and bassist for the Grammy-nominated Christian rock band SKILLET, has reacted to a leaked draft opinion published by Politico on Monday (May 2) that shows a majority of the U.S. Supreme Court has voted to overturn the landmark 1973 ruling Roe v. Wade that established the right to abortion nearly 50 years ago.

According to the Politico report, the draft was written by Justice Samuel Alito and circulated in February. Alito was reportedly joined by justices Clarence Thomas and all three of former President Donald Trump's nominees — Neil Gorsuch, Brett Kavanaugh and Amy Coney Barrett — while justices Stephen Breyer, Elana Kagan and Sonia Sotomayor were working on dissents. It was unclear how Chief Justice John Roberts voted.

In a new 13-minute video posted to his Cooper Stuff YouTube channel, Cooper addressed Alito's draft opinion, which would strike down Roe v. Wade and allow states to restrict abortion. The 47-year-old said in part (as transcribed by BLABBERMOUTH.NET): "If this actually happens, what it means is that Roe v. Wade is going to be turned over. Now, let's just say this: this is something that Christians have been praying about literally for 50 years. Okay, we can't exaggerate this — 50 years Christians have been praying about this. People have been begging and pleading God to intervene. People like my mom, who's with Jesus now, prayed and fasted and went to prayer meetings and went and handed out literature at abortion clinics trying to save babies. This was just a tradition that I grew up in. People in my family fight big time for the pro-life cause. My daughter volunteers at a pro-life clinic, as well as my church has a pro-life prayer meeting that meets every single Monday, week after week, year after year. People have been begging and pleading for this to change.

"This is huge news, all right?" he continued. "Actually, my father-in-law and my mother-in-law were both arrested 20 years ago for standing outside of an abortion clinic — being peaceful, of course, but trying to hand out literature and that sort of thing. People have been fighting for this for decades."

Another Christian rocker who apparently agrees with Cooper is STRYPER frontman Michael Sweet. Two years ago, Sweet publicly revealed his views on abortion while discussing how he decides which presidential candidate he gets behind. He told Slabber.net in an interview: "It's not anything new for people to hear from a Christian that they support pro-life. We want to see children that are unborn, live. The other side of that argument, for example, if the woman is raped and she loses her right to have an abortion, that's a terrible thing as well, and I agree with that. You would think in this case a woman should have the choice to keep that baby or not keep that baby. It's a tough argument. There are pros and cons to both sides of this argument. For me, as a believer, as a Christian, the pro-life pros outweigh the cons. Therefore, I'm a guy who typically gets behind whoever is the candidate that is pro-life as well."

In April 2021, Cooper told the "Undaunted.Life: A Man's Podcast" that it was perfectly fine for Christians to play rock music. "I would say that music is created not by the Devil; [it is] created by the Lord," he said. "All things were created by God. So instead of thinking that the Devil owns a genre of music, I would say capture that music and bring it back into subjection under the Lordship of Christ."

In a 2017 interview with the "Jesus Calling" podcast, Cooper stated about his now-19-year-old daughter: "My daughter is a real Jesus lover, ever since she was a kid. Maybe everybody says that about their kids, which is lovely, but most people that meet her are, like, 'Wow, she's just kind of different.' She's always been that way, and her mom is that way as well. Thankfully, she got her mother's depth and passion for Christ."