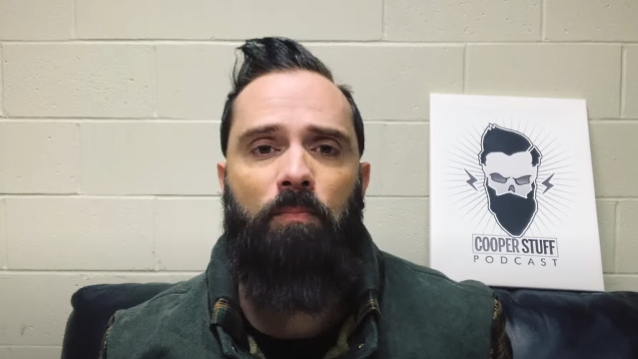 SKILLET's JOHN COOPER Says 'Rock And Roll Does Not Belong To The Devil': 'Music Belongs To God'

John Cooper, the frontman and bassist for the Grammy-nominated Christian rock group SKILLET, recently spoke to blogger and podcaster Alisa Childers about the criticism he and his bandmates have faced for at times sharing the stage with "horrifically un-Christian" artists at various rock festival around the country. He said (as transcribed by BLABBERMOUTH.NET): "There are people that criticize, and, honestly, I don't even mind it. It's never even crossed my mind to bother me, just because I'm, like, 'Hey, they don't get it and they don't need to.' … So I don't really mind it.

"My vision is this — part of what [the new SKILLET album] 'Dominion' is about, to me, the culture mandate, part of that, to me, and I know not all Christians agree with this, by the way, but this is just my thing, I believe that every area of life, every box, every nook and cranny belongs to Christ. I believe that rock and roll and the arts does not belong to the devil. The devil may have used it, he may have twisted it, he may have stolen something — which is what the devil does, of course; he comes in and he tries to do something kind of like what God does, right? But he wants to steal the glory and he twists it and he perverts it. I believe that the arts belong to God. Music belongs to God. It is for his glory. And so when I create art and I go and I play music, I believe that it is taking back something, bringing it back under the subjection to Lord Jesus Christ. It all belongs to him. It is for his glory. That world does not belong to the devil. Not everybody necessarily agrees with that.

"In terms of the bands, I have great friendships with so many atheist rock and roll singers who have shown me a ton of friendship and a ton of respect," he continued. "I've been very respected by people who, some of them are atheists and don't know that they hate the gospel. Some of them are atheists and they are what I would call 'angry atheists.' They know they hate the gospel and they are actively at war. Some of them, they just are atheists and they don't wanna fight. Even the angry atheists that I've met, we get along and they've always been respectful to me and they've always kind of said, 'John, I like your music because you sing about what you believe in, and that's what makes good art.' And I would say to them, likewise — some Christians get offended by this — but even if there's a song that offends me, when it's authentic, I recognize that is good art; it's provocative [and] it makes you think. It doesn't mean I wanna listen to it; it doesn't mean I want my kids listening to it; it's just an acknowledgement that they're making good art. A deeper subject would be that in the end, one way or the other, God is going to get the glory for that. Even for people who hate him, God will find — in his mysterious will, he finds a way to bring people to their knees, and he takes the glory… So that's kind of my take on it. I've got great friends in that world and 99 percent of them have shown me an incredible amount of respect and friendship."