After five years of computer failure, illness, lineup changes and countless other obstacles, Swedish progressive death metallers SKYFIRE will triumphantly return to unleash their long awaited fourth album, "Esoteric", this September 8 in North America, September 14 in the U.K. and September 18 in the rest of Europe via Pivotal Rockordings.

Commented bassist Martin Hanner: "For this album, we were heavily inspired by bands like SYMPHONY X and BAL-SAGOTH; bands that write epic and catchy songs at the same time. We really thought long and hard about how we can make this new record as epic as possible without it coming off as cheesy and we then carefully began writing the subtle choir and orchestra parts to accompany the already bombastic music. This took quite some time, but we are pleased with the final result. The writing and overall planning for this CD took years and we literally weren't finished writing until right after all the recording was done.

"When the album was finished, we had a long discussion with our label regarding what to do about bonus tracks. Both parties agreed that the songs we wrote for this album are too special to be broken up for different territories. So instead we decided to include the old 'Within Reach' demos as bonus tracks. These are literally the first legitimate SKYFIRE recordings ever, and as you'll soon see, the first and only time you'll hear SKYFIRE with a clean singer. Even though the songwriting and especially the lyrics are immature, we think these songs will be cool for a lot of fans who might have wondered what we sounded like all those years ago. These tracks were NEVER made available to the public until now."

Hanner also revealed the concept behind the stunning artwork for "Esoteric" (see below), which was designed by Pär Olofsson (THE FACELESS, PSYCROPTIC, SPAWN OF POSSESSION) with layout handled by CULT OF LUNA's Erik Olofsson.

"The cover is basically a guy who is being initiated by a cult," he said. "You can choose to interpret the guy in pain as he is being burned alive by the cultists just so he can join, or you can interpret the guy as having achieved the power he sought, and he is screaming out of bliss and not pain. It relates to the title because a lot of us would think that what he is doing is kind of ridiculous — why would anyone want to join a cult? But people do strange things and they have their own subjective, esoteric sense of understanding that to the rest of us, is strange or crazy. I think we ALL in some shape or form have esoteric practices that a lot of other people don't 'get,' whether it's believing in something or even listening to metal music."

SKYFIRE recently made the song "Esoteric" available for download on the band's MySpace page.

The group will release a four-song, digital-only EP entitled "Fractal" in July via Pivotal Rockordings. "Fractal" is made up of songs that were written between 2004's "Spectral" and the "Esoteric" album.

"Fractal" marks the first official SKYFIRE release to feature new members Johan Reinholdz (guitars; ANDROMEDA, NONEXIST) and Joakim Karlsson (vocals; MARK:BLACK). All music was recorded, mixed and mastered at Powernest Studios with the exception of the track "Esoteric", which was mixed and mastered by Jonas Kjellgren (SCAR SYMMETRY, SONIC SYNDICATE, ZONARIA, THE ABSENCE). Vocals for all tracks were produced by THE FORSAKEN guitarist Patrik Persson.

01. The Land of the Wolves
02. Bereaved in Denial
03. The Transgressor Within
04. Esoteric ("Esoteric" album preview track) 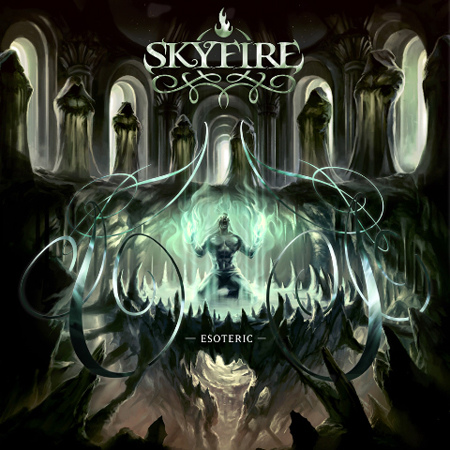