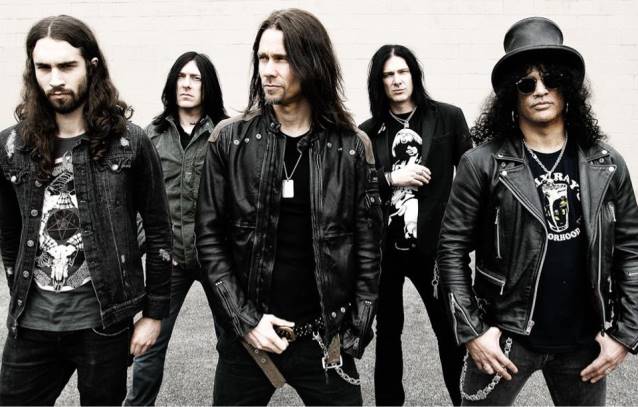 Slash and his solo band, MYLES KENNEDY AND THE CONSPIRATORS, have finished recording the third album under the solo Slash banner. A total of 17 songs — including one instrumental — were laid down for the follow-up to 2012's "Apocalyptic Love", which is being helmed by producer Michael "Elvis" Baskette, known for his work with Kennedy's other band, ALTER BRIDGE, as well as FALLING IN REVERSE, STORY OF THE YEAR and INCUBUS, to name a few.

Asked how the new Slash material is sounding, Kennedy told VH1 Radio Network's Dave Basner: "It's good! It's very rock. It's very rocking. I think it's more up-tempo than the last record was, and [Slash has] got some really great riffs on this record. Killer stuff."

Slash bassist Todd Kerns said about the album at his blog, "I have to admit that, conceptually, I felt that 'Apocalyptic Love' would be a tough act to follow, but I can say with all the confidence in the world that we are more than armed and ready."

Kerns added, "The material on this album is more serious and more fun at the same time, which is a tough balance indeed. The songs are sleazier, tougher and more dangerous . . . We are all very excited to unleash the monster upon you as soon as we can."

Slash officially began recording as a solo artist with his self-titled 2010 debut album.

The former GUNS N' ROSES and VELVET REVOLVER guitarist employed a different vocalist on each track of his first album, before settling on ALTER BRIDGE's Myles Kennedy for both touring and eventually recording.

"Apocalyptic Love" earned Slash his two first-ever No. 1 U.S. rock radio hits with "You're A Lie" and "Standing In The Sun". The record's third single, "Anastasia", cracked the Top 10 at Modern and Active Rock and Top Five at Mainstream Rock.

Slash told The Pulse Of Radio that the partnership with Kennedy seemed natural from the start. "We work really well together," he said. "I never really thought about how that's progressing. It's real natural. So it's like any kind of sort of close relationship, where I think we established it really, really early on and now we're just sort of doing our thing, you know. Yeah, I don't know what else to say — it's just a really cool kind of synergy that we've got."

Slash and AEROSMITH last month announced that they will team up for a 2014 U.S. tour this summer. The two acts revealed the joint road trip, dubbed "Let Rock Rule", via a series of tweets on March 21 from Slash and members of AEROSMITH, with exact dates and venues due to be revealed on Tuesday, April 8.

Recording of the next LP is finished! These are all working titles fyi. Except for 1. iiii]; )' http://t.co/AM1B0asP7m