As the music world prepares to descend upon music week in Austin, Texas during SXSW 2014, the Grammy-winning, iconic guitarist and Rock And Roll Hall Of Fame artist Slash has announced the Slashathon. Powered by Geeklist, Slashathon is the first-ever artist-focused hackathon whereby developers create applications and technology within a 12-hour period. The music-oriented Slashathon will offer developers a unique challenge to create solutions for musicians to engage their communities in new ways for an album release. Slashathon will take place Wednesday, March 12 at Capital Factory (701 Brazos St., STE 1601, Austin, Texas). The entire Slashathon will be live-streamed all day, via Livestream.

Slash will be joined by Bram Cohen (chief scientist and founder of BitTorrent) and Robert Scoble (first employee at Microsoft, creator of Hackathons, Rackspace) onsite in Austin to judge the Slashathon. Also, a major entrepreneur in the world of tech will make a surprise guest appearance. The Grand Prize includes a Gibson guitar autographed by Slash, $1,000 dollars and the opportunity to have Slash use the winning hack with the release of his new album, coming out in late 2014.

Register for the Slashathon at: www.slashathon.com. *SXSW badges are not required to participate.

A pioneer in blending tech and music, Slash launched his first two music apps "Slash360" and "Slash AmpliTube", to promote the "Apocalyptic Love" album (2012) featuring his band MYLES KENNEDY AND THE CONSPIRATORS. The critically acclaimed album "Apocalyptic Love" earned Slash his two first-ever No. 1 rock radio hits — "You're A Lie" and "Standing In The Sun" — and stormed onto The Billboard 200 chart at No. 4, marking the top rock debut for that week. Last year, Slash also partnered with the Swedish company Rovio — creator of the popular mobile game Angry Birds — to create a theme song for the "Angry Birds Space".

Slash and his band are currently in the studio working on a new album, to be released in the fall of 2014. 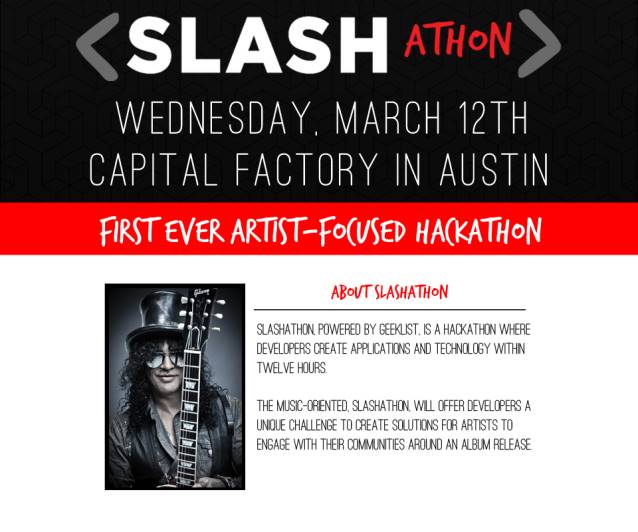