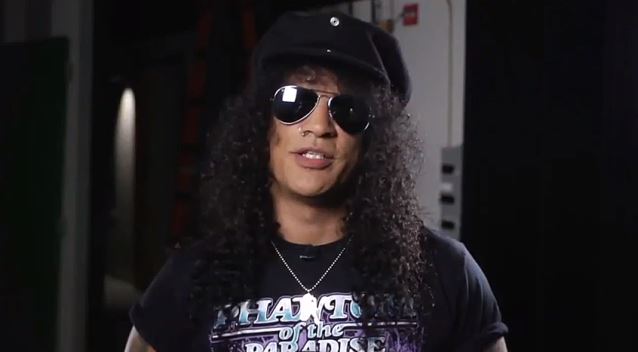 Slash has once again commented on Duff McKagan's reunion with Axl Rose at five GUNS N' ROSES concerts in South America and the Revolver Golden Gods awards show in Los Angeles in April. McKagan joined the band to fill in for bassist Tommy Stinson, who was committed to two reunion shows at the Coachella festival with THE REPLACEMENTS. Slash told DailyStar.co.uk earlier this month: "It really isn't that big a deal. Duff told me he was going to fill in for what's his name."

He added: "It's a different dynamic than my relationship with GUNS or Axl. I don't let them worry me."

Slash also commented on the negative feedback to METALLICA's upcoming headlining appearance at the U.K.'s Glastonbury festival, which will be the first time in the event's 44-year history that a metal act has topped the bill. Asked about the response, Slash told DailyStar.co.uk: "There's eclectic festivals with a mish-mash of music and I appreciate that. We played Glasto a few years ago, [and] it was interesting. But when METALLICA comes in, you can't have them come on after fucking Katy Perry. It should be a METALLICA-type festival."

Slash recently told TeamRock that he bears no ill will toward McKagan for doing the aforementioned GN'R shows, saying, "I don't judge Duff. He's cool. He just has a way more amicable, neutral relationship with Axl than I do."

Slash has set "World On Fire" as the title of his third album under the solo Slash banner, with the disc set to come out on September 15. Slash and his band, MYLES KENNEDY & THE CONSPIRATORS, recorded 17 songs for the follow-up to 2012's "Apocalyptic Love". Among the tracks on the record are "Shadow Life", "Automatic Overdrive", "Wicked Stone", "30 Years To Life", "Bent To Fly", "Battleground" and the title track, which will also serve as the set's first single.