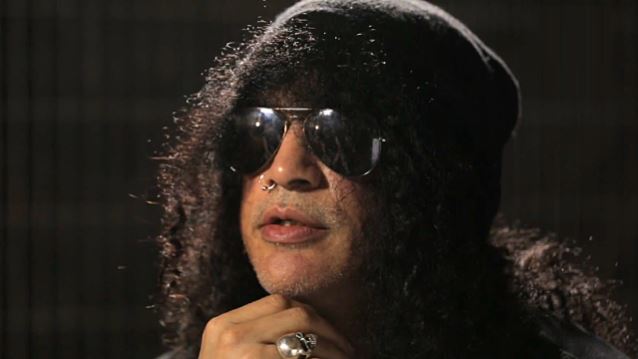 SLASH: 'Even Heavy Metal Bands Are Trying To Be Top 40'

Samuli Väänänen of Radio Nova recently conducted an interview with legendary GUNS N' ROSES and VELVET REVOLVER guitarist Slash. You can now listen to the chat using the audio player below.

Speaking about the state of the record industry in 2015, Slash said: "I think the music business itself sucks. It's turned into a very corporate, materialistic… I mean, even artists are trying to conform to the record industry now. It used to be the artist was for the artist and there was a conflict of interest between the creative artist and the record company wanting to make a lot of money, and eventually they'd sort of work it out. Because then, they used to develop artists, and now it's just like Top 40 — everybody's trying to be Top 40. Even heavy metal bands are trying to be Top 40. So it's not a big turn-on, like it was for me in the '60s and '70s and '80s where it was exciting and there was a sense of rebellion and whatever. So I just do what I do, which is completely against the grain of what the industry is all about. But, as a whole, it'll get better eventually. It always has its ups and downs."

Slash also talked about the hardships facing up-and-coming acts, particularly as it relates to their ability to break through the clutter and get their music heard.

"For new artists, it's really hard," he said. "And even if you have a good band — you're talented musicians and songwriters and whatnot — it's, like, if you don't have a Top 40 success on your first single, there you're done. And in order to get a Top 40 success on your first single, you have to make compromises for your material for the record business itself. But that said, the flipside, the positive side, is that there's all kinds of platforms that you can expose yourself on now that didn't exist back then, what with YouTube and Twitter and Facebook and all that shit. So that's sort of cool. And I think what's gonna end up happening is bands are gonna start realizing that there's no money in it, and you have to do it just for the passion of it."

Slash last year responded to KISS bassist/vocalist Gene Simmons' comment that "rock is dead." He said: "I think probably where Gene's coming from is that the music business itself is not catering to rock and roll at all. And if you're aspiring to be a guitarist or a drummer or a singer in a rock band and, sort of, make your way up the ladder, the obstacles are much bigger than they were when I first started. There's a lot less opportunities in the record business, to get a record deal and get your record out there. There's not a lot of radio play for it. But, that said, the rock and roll audience is rabid. [It's] huge and just as alive and kicking as it ever was. So, I get what [Simmons is] saying, but I also think that it's really great to, kind of, just sort of, separate the men from the boys, where if you're really passionate about the kind of music that you wanna do and you're not looking at it from a dollars-and-cents point of view, but you just wanna create new music and somehow go out there and play live and get it out there, that passion for it has to be honed in and it has to be real. It can't be about buying cars and getting laid and all the other perks that go along with making a lot of money. It's gotta be about the music, and I think that's pretty healthy."