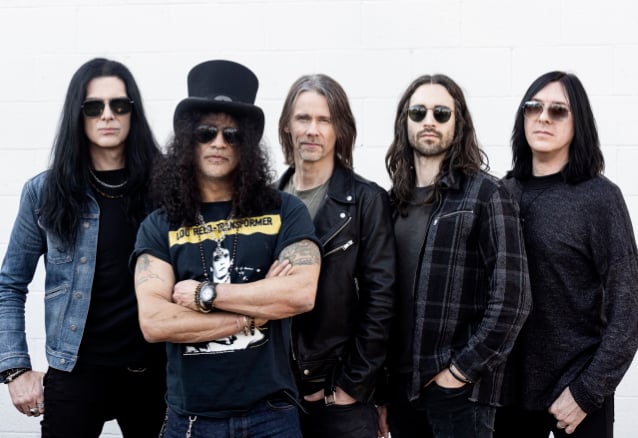 SLASH FEATURING MYLES KENNEDY AND THE CONSPIRATORS have announced a global streaming event, to be held Friday, April 15 at 12 p.m. PT in an exclusive partnership with premium concert livestream platform Veeps.

"Slash Ft. Myles Kennedy & The Conspirators - Live From Boston", shot on location this month during the group's sold-out House Of Blues show, the full production, multi-camera streaming concert event will give fans around the globe the chance to see SLASH FEATURING MYLES KENNEDY AND THE CONSPIRATORS' electrifying live show which The Chicago Sun-Times heralded "a rock-solid powerhouse" and "a curated, 21-song salute to some of their own best material" adding, "As long as Slash is still standing, rock music will always be alive and well." The setlist will include classic favorites, as well as brand new songs from their new album "4", released last month on Gibson Records/BMG.

Tickets for "Slash Ft. Myles Kennedy & The Conspirators - Live From Boston" are on sale now at Veeps. The show will be available for viewing for 48 hours after the event airs.

Fueled by the explosive Top 10 rock song "The River Is Rising", its high energy live performance video, as well as the best critical acclaim of SLASH FEATURING MYLES KENNEDY AND THE CONSPIRATORS' career, "4" debuted as the No. 1 most-selling hard rock album during release week. "The River Is Rising" reached No. 7 on the Active Rock chart, marking SLASH FEATURING MYLES KENNEDY AND THE CONSPIRATORS' eighth consecutive Top 10 single at radio.

SLASH FEATURING MYLES KENNEDY AND THE CONSPIRATORS' performed "The River Is Rising" — which Rolling Stone hailed as "raucous" and Billboard described as "euphoric" with "a surging main riff, dissonant hooks, an infectious chorus, and a guitar solo that conjures images of a rowdy bar brawl" — on "Jimmy Kimmel Live!"Slash also did an interview with Kimmel during the show.

A decade and four albums into their career, "4" marks the first new music from SLASH FEATURING MYLES KENNEDY AND THE CONSPIRATORS' in four years and Slash's fifth solo album overall. Slash and his CONSPIRATORS bandmates Myles Kennedy (vocals),Brent Fitz (drums),Todd Kerns (bass and vocals) and Frank Sidoris (guitar and vocals) partnered with producer Dave Cobb (Chris Stapleton, John Prine, Jason Isbell, RIVAL SONS),for the LP, resulting in the band's strongest collective statement to date. Cobb shared the band's desire to lay down the tracks live in the studio — including guitar solos and vocals — a first for the group, revealing a stunning, vital sound and style all captured live at RCA Studio A in Nashville, Tennessee.

"4" is SLASH FEATURING MYLES KENNEDY AND THE CONSPIRATORS like you've never heard them before. A vibrant rock album fueled by memorable guitar hooks and compelling melodies, big choruses, and even bigger riffs, "4" hits on a wide range of sounds, styles, and moods in 10 songs, and does it all with laser-sharp musical focus and a lightning-in-a-bottle sense of immediacy. The album kicks off with "The River Is Rising", one of the band's toughest and most dynamic compositions to date, unraveling via a menacing, tightly-coiled riff and deep-in-the-pocket groove. From the deliberate stomp rock of "Whatever Gets You By", the bright-toned, heart-on-sleeve pop-rocker "Fill My World", to the talk box-drenched guitar hooks of "C'est La Vie", exotica-tinged psychedelic fever dream of "Spirit Love", the anthemic swell of "The Path Less Followed" to the cowbell-inflected boogie-shake of "Actions Speak Louder Than Words", the grimy AEROSMITH-esque funk of "April Fool" to the rampaging attack of "Call Off The Dogs" and climaxing with the epic six-minute album closer "Fall Back To Earth", "4" is an album that grabs hold and never lets go.