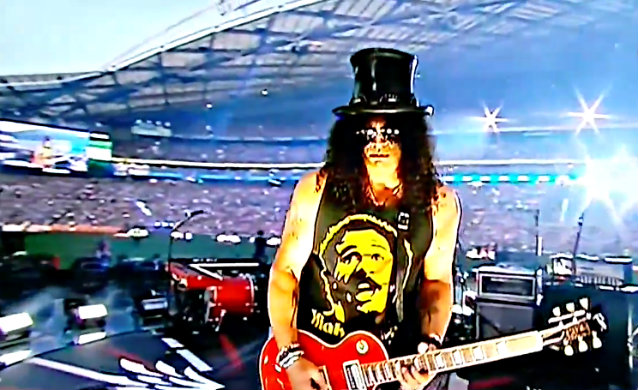 Slash recently told the Irish Times that he disagreed with KISS bassist Gene Simmons' claim that "rock is dead." Slash said, "There are a lot of issues that have popped up over the last 20 years or so that have had a huge effect on the industry as a whole… If they don't want to waste money on bands and artists that aren't doing what you consider popular music, that's more because every single record company has been digested by a huge corporate conglomerate and they just want to do what makes the most money."

Slash added: "I sort of appreciate the landscape at the moment because it has forced us to really feeling strongly about expressing ourselves in the rock 'n' roll format and really believe in it… The quality of commercial music is in the toilet, but the people who do it for real and mean it are still fantastic. They just don't have the outlets they used to have."

Slash has been putting out his recent solo albums through his own label, Dik Hayd Records, and The Pulse Of Radio asked him how it compared to working with major labels in the past. "It's really enabling me to make records and be able to put them out myself so I don't have to do the gamble with the big record companies," he said. "Now as far as like the glory days of the record business, that's something — yeah, I mean, you can miss it, but it's changed so much and most of the companies have turned into such conglomerates, it's pointless to really sort of miss the old days 'cause they're long gone."

Slash did admit to the Irish Times that rock music "is probably at its lowest ebb of all time" in terms of record sales and radio airplay. But he added, "As far as the industry is concerned, rock 'n' roll is very much the ugly cousin. I sort of dig that because it provides a certain sense of rebellion and attitude that was missing."

Slash released his third solo album, "World On Fire", on September 16. It sold around 29,000 copies in its first week of release to debut at No. 10 on The Billboard 200 album chart last month.