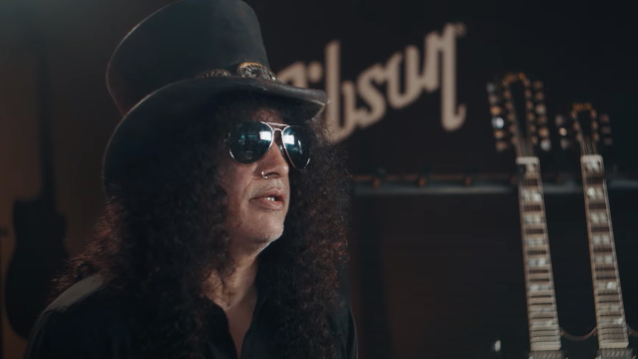 In the video below, GUNS N' ROSES guitarist Slash describes how AmpliTube 5 is "so damn easy" and "sounds amazing" and how he uses it all the time for demoing, writing, and recording.

Slash knows AmpliTube is the real deal, he uses it all the time, and AmpliTube 5 has taken it to a new level. Slash says: "It was great to begin with, but it has gotten even better."

AmpliTube Slash puts you in front of some killer rigs. Want to rock Slash's rig? Now you can with AmpliTube Slash, one of the great signature collections inside AmpliTube custom shop. Slash's tone is instantly recognizable and can now be yours. Play through a rock icon's pedals and amplifiers, all from the convenience of your personal playing space — your studio.

AmpliTube Slash is a suite of Slash's signature guitar effects, amps and cabs that he uses on tour and in the studio. IK Multimedia worked closely with Slash to recreate his rigs perfectly and Slash says we nailed it. Now you can play and record with the exact sounds that make the legend.

Slash joined GUNS N' ROSES in 1985 in Los Angeles and quickly rose to international fame by the summer of 1987 with the release of the band's debut LP, "Appetite for Destruction", which has sold over 30 million copies and became one of the best-selling rock LPs of all time.

Slash has amassed album sales of over 100 million copies, garnered a Grammy Award and seven Grammy nominations and was inducted into the Rock And Roll Hall Of Fame. Time magazine named Slash No. 2, behind Jimi Hendrix, on its "The Ten Best Electric Guitar Players of All Time" list. Slash helped create signature sounds like the guitar riff on No. 1 hits for GUNS N ROSES, "Sweet Child O' Mine" and "Welcome To The Jungle". After leaving the band, Slash went on to critical acclaim with SLASH'S SNAKEPIT and global success with the supergroup VELVET REVOLVER. Slash's self-titled biography, critically well-received, climbed the bestseller list in both the U.S. and U.K., hitting No. 8 on the New York Times Bestsellers List. Slash landed on the top of the charts with his first solo album, "Slash" (2010) which featured Ozzy Osbourne, Fergie and more. Slash also released "Nothing Left To Fear" (2013) the first-ever motion picture he co-produced from Slasher Films, his film/TV production company.