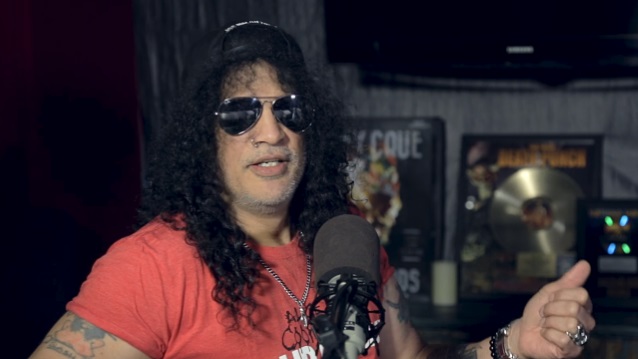 Slash says that reconnecting with Axl Rose after nearly two decades was a "cathartic" experience.

2016 saw "classic"-lineup GUNS N' ROSES members Slash and Duff McKagan rejoin the band for the "Not in This Lifetime Tour", marking the first time the two musicians had been part of the group since the 1990s.

During a brand new appearance on the "Sixx Sense" radio show hosted by MÖTLEY CRÜE and SIXX: A.M. bassist Nikki Sixx, Slash confirmed that he hadn't spoken to Rose in 19 years following his exit from GUNS N' ROSES. "There was always that thing, and I won't get into all the personal stuff," he said (see video below). "But even over that period of time, there was a lot of bad feelings from the breakup all throughout that 20 years, whatever it was. But there's also a part of you that's like in a marriage, where you love somebody and… so there's always that feeling, but then there's all this negative stuff."

Slash went on to once again blame the media for causing unnecessary conflict between him and the GN'R frontman, who famously called the guitarist a "cancer" during a 2009 interview. "There was so much stuff perpetuated in the media, and it was just blown out of proportion," Slash said. "So when he and I talked for the first time [since 1996], it was really, really cool."

According to Slash, the first time he and Axl spoke in 2015, "it was on the phone, and then we got together when I got back into town. 'Cause I was on the road — I was in Peru; I remember it specifically," he said. "It was very cathartic to physically talk. 'Cause there's a bond that you have that's never [broken]. And then what happens is the bond makes the negative side of it that much worse, because you're forced out of it."

The debut gig the reunited trio, along with four backing musicians from latter lineups, played was at the Troubadour nightclub in Los Angeles on April 1, 2016, and "it was just fucking awesome," Slash said. "And it just snowballed from there. So [it's been] 18 months, and it's been… I mean, if you had talked to me 20 months ago, I would have said, 'No fucking way. It's never gonna happen.' But it did, and it was fucking awesome."

Slash said that it "very surreal" to look over to the side of the stage and see Axl, who famously said in a 2009 interview with Billboard that one of the two of them would "die" before a reunion was to ever take place. "There were these moments on stage where you sort of take stock of where you are at the moment and go, 'Wow! This is a trip,'" Slash said. "And the funny thing about it… There was something about this particular tour that didn't take me back to the last tour in the '90s where it was, like, reminiscent of that — it was completely uniquely its own new thing. Same guys, same songs, but a whole different experience."

Axl, Slash and Duff are the only GN'R bandmembers whose names are being featured in advertising for the "Not In This Lifetime" tour, with additional members Richard Fortus, Frank Ferrer, Dizzy Reed and Melissa Reese not highlighted.

GUNS N' ROSES was inducted into the Rock And Roll Hall Of Fame in April 2012. Adler, Slash, McKagan and Matt Sorum (who replaced Adler in GUNS N' ROSES) attended the ceremony, while Rose and Stradlin stayed home.

Slash told The Pulse Of Radio a while back how his relationship with Rose disintegrated during the final years of the classic GUNS lineup. "His sort of m.o., as far as the band was concerned, over time got so exaggerated in the rock-star sense or whatever and he became such a dictator and this and that and the other, that it was impossible for me to work with him, because I'm not the kind of person that takes orders, you know," he said.

GUNS N' ROSES will return next June for a seven-week European jaunt, but the band's plans until then, and beyond that, remain unknown for now. The three core members have not given a single interview together.