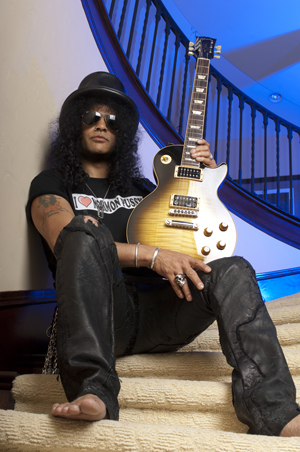 Slash: "It's really sort of disappointing to me that he's gone and done that, for whatever reason — a lot of it having to do with [that fact that] I just know the guy and the other guys in the band are bummed out and they've had a really rocky road for awhile. And then just because 'American Idol' is what it is, so it's hard for me to put the thing together."

Slash: "It was cool. I got an e-mail from Duff going, 'I'm checked into a hotel and Axl [Rose, GUNS N' ROSES singer] is in the room next to me.' And that's how it all started. And he just sort of kept me posted through the day and at one point he said he was going down to the venue withAxl. And I was, like, 'Wow!' 'Cause a lot of years have gone by. And so then the next one was that he was gonna be going on stage or something. And so he went and they did, like, I think it was five or six songs. So it was cool. And then the next day he told me it was great, everything was very cool, they went out and had dinner, and so they had that sort of, whatever, rekindling kind of thing. All things considered, the only thing I said about it was that... 'cause I know that they still ended up going on an hour late. And I was, like, 'Oooh.' That's the only part that would have left a bad taste in my mouth, supporting that."

On why he (Slash) seems to be the only member of the classic GUNS N' ROSES lineup that Axl is not "cool" with:

Slash: "I think there's some deep-seated stuff there. And it really can only come down to what was going on at the time when I finally said, 'I've gotta go.' And I think there was a certain sense of abandonment there. So it probably stems from that. And then even though I try to keep a politically correct tongue in this situation, I have at times really spoken my mind about the situation, especially when VELVET REVOLVER's first record came out, I was inundated with all this press and that was all that they wanted to ask about, and my first gut reaction was venting. So there was a lot of negativity that was sort of expressed then and has since been perpetuated by the media on a regular basis. So there's a certain kind of tension that just hangs in there."

On whether he would ever consider taking part in a reunion of the classic GUNS N' ROSES lineup:

Slash: "It's been a long time. So, all things considered, if he [Axl] really decided he wanted to do it and the other guys all wanted to do it... I mean, I know everybody's around, but there has been no conversation, like, 'Let's get the band back together.' If everybody wanted to do it and it was very clear amongst us, which means we would have to clean up some personal stuff, which we haven't even begun that. So then the biggest and most important part of it was... 'cause it seems like it would be a lot of fun to do, just go back out there, and it seems like a relatively simple idea and there's a ton of fans out there that would love to see it. It'd be cool. But we'd have to do things way differently than we did in '91, '92, '93 and whatever... And I don't think that's changeable. That whole production would have to tighten up and be like a real working band, and I don't think that's salvageable."