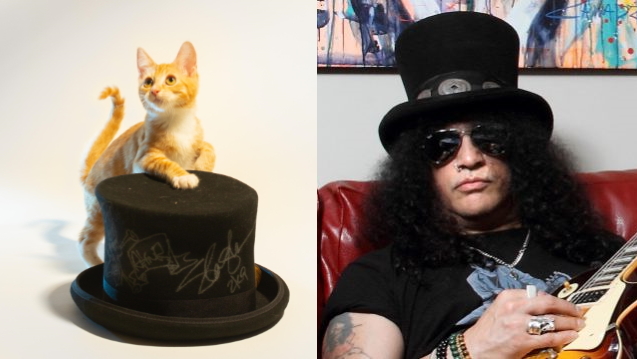 Kittens rock hard, and no rescue organization rocks harder than Kitten Rescue. In support of Kitten Rescue's life-saving mission, iconic GUNS N' ROSES guitarist Slash, one of rock's coolest cats, has donated an autographed top hat and guitar pack for the group's online auction to help the organization in its fundraising.

As distinctive and iconic as the guitarist himself, the Slash autographed top hat, an astoundingly unique piece of hard rock memorabilia, will complete any music fan's collection. Fans can bid here.

Kitten Rescue is a non-profit, volunteer-run organization devoted to finding loving homes for unwanted, homeless cats and kittens. Kitten Rescue saves cats and kittens from the streets of Los Angeles and from city shelter euthanasia. Since their start in 1997, they have grown into one of the largest, most well-respected animal welfare groups in L.A. Other notable rock icons such as BLACK SABBATH bassist Geezer Butler and his wife Gloria, OZZY OSBOURNE bassist Robert "Blasko" Nicholson, legendary DEEP PURPLE bassist/vocalist Glenn Hughes and his wife Gabi, as well as BLABBERMOUTH.NET are some of the organization's loyal supporters. None other than The Metal God Rob Halford as well as Elvira The Mistress Of The Dark have lent their image in support of Kitten Rescue.

Note: The top hat shown in photo is not the one being auctioned.