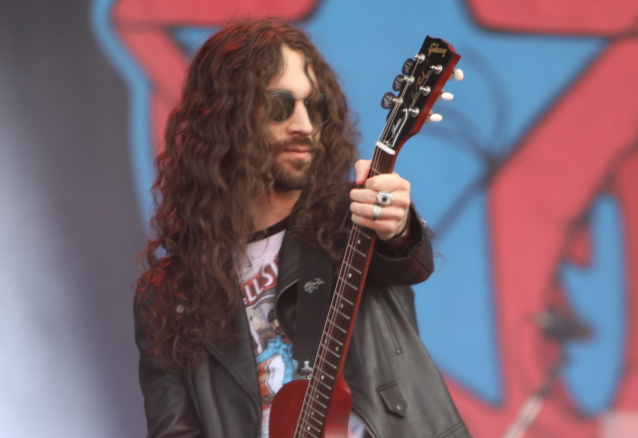 Sidoris, who has been with Slash since 2012, has also played with Alice Cooper, the late great Lemmy Kilmister and RUSH's Alex Lifeson. More recently he has joined MAMMOTH WVH, the solo band of Wolfgang Van Halen, son of VAN HALEN legend Eddie Van Halen.

Frank uses the Custom Shop 50 amp, known for its exquisite blues / rock tones providing an inspiring canvas for his rhythm work combining it with the cabinet main stay for touring artists, the classic PPC412.

Talking about being an Orange ambassador, Sidoris said: "It's an honor to be associated with Orange, a company that has remained at the pinnacle of iconic tone and style for decades and continues to catch eyes and ears on stage and in the studio."

In December, Slash confirmed that SLASH FEATURING MYLES KENNEDY AND THE CONSPIRATORS was putting together ideas for a new album. The effort will be the follow-up to "Living The Dream", which came out in September 2018 via Slash's own label Snakepit Records, in partnership with Roadrunner Records. The disc was Slash's fourth solo album, and third with Slash and his CONSPIRATORS bandmates Todd Kerns (bass, vocals), Myles Kennedy (vocals), Brent Fitz (drums) and Sidoris (guitar and vocals).