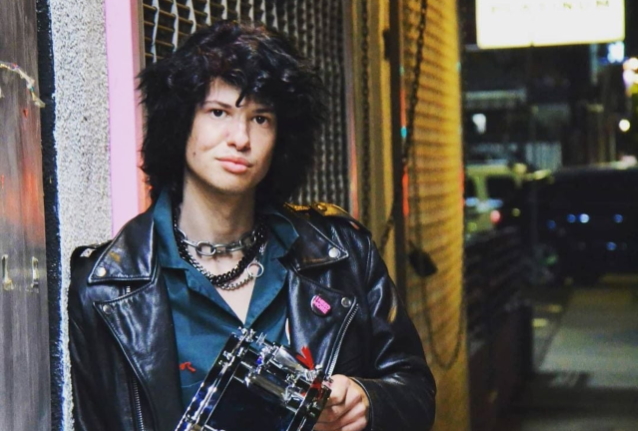 London is currently a member of the Southern California rock band SUSPECT208 which released its debut single, "Long Awaited", in November. He is joined in the group by 20-year-old Noah Weiland, the son of late STONE TEMPLE PILOTS singer Scott Weiland; and 16-year-old bassist Tye Trujillo, son of METALLICA bass player Robert Trujillo. An EP will follow in the coming months.

ASBA said in a statement: "We are proud to welcome London Hudson to the ASBA family! You would have recently heard his talent in the killer band SUSPECT208. London has been playing for the past 11 years and has four years of performing and recording. He is an accomplished drummer with a s**tload of skills in various genres and styles. He will be playing on the ASBA Rive Gauche kit Back in Black finish, with a Steel Loving You Strong metal snare. Get ready to have your ears blown out!"

London is Slash's son from his marriage to Perla Ferrar. The couple tied the knot in 2001 and reached a divorce settlement in September 2018. As per the settlement — obtained by TMZ — Slash agreed to pay Perla $6.6 million as well as $100,000 per month in spousal support and $39,000 per month in child support.

In a 2018 interview with the "Appetite For Distortion" podcast, London was asked when he realized how famous his father was. "Since I was little, especially with the VELVET REVOLVER stuff, because that was the most I toured with him, was for the VELVET REVOLVER stuff," he said. "Seeing that many people at the shows was kind of crazy, and how they all just worshipped. Then going on the last GN'R tour, and seeing all those people who still like him for much older stuff, is when it really clicked, going on that tour. But it never really hit me until this summer, where I was like, I don't want to live in his shadow, when I started playing in the band. That's the main reason I don't play guitar or stringed instruments."