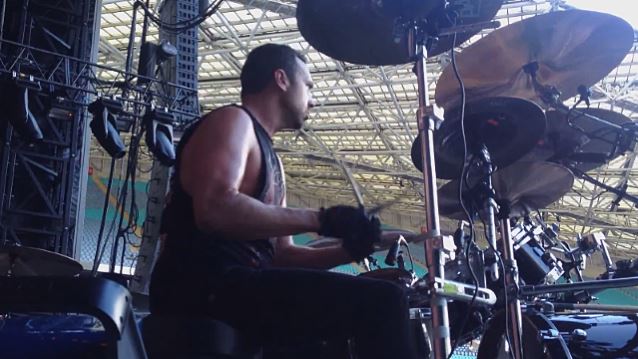 Drummer Jon Dette (ICED EARTH, TESTAMENT, SLAYER, ANTHRAX, ANIMETAL USA) has uploaded drum-cam footage from the Sydney and Perth stops of SLAYER's appearance at the 2013 edition of Australia's Soundwave festival. Check out the clips below.

Dette played with SLAYER during Soundwave after the band's longtime drummer, Dave Lombardo, sat out the tour due to a contract dispute with the other members of the group.

Asked how he came to be playing with SLAYER again on the Soundwave festival run, Dette told Tama: "I got a call from Kerry [King, SLAYER guitarist]. And he said, 'Hey, what are you doing next week when you're in Australia when you're not playing for ANTHRAX?' And I said, 'Drinking.' [laughs] He said, 'Well, you might wanna hold off the drinks, if you can, 'cause we might need you to fill in, if you can.' And I said, 'Of course.' I mean, first, I was kind of taken aback, I was a little paused. But they basically called me and asked if I could do the Australia dates for them."

Regarding his history with SLAYER, Dette said: "The SLAYER thing, again, it's been… My God, it's been 16, 17 years now. I joined SLAYER — officially joined SLAYER — in December of 1995, and I replaced Paul Bostaph. He had just completed the 'Undisputed Attitude' record. So I was with them until early 1997, and then Paul came back into the band and then I actually went back into TESTAMENT. I joined TESTAMENT in '94, replacing John Tempesta just after the 'Low' record. So it was a cool little period of time. Again, I was just extremely fortunate and privileged to be part of their history. And now, to be part of the SLAYER history again is awesome."

Dette spent the last couple of months of 2013 and much of 2014 sitting behind the kit for ICED EARTH.