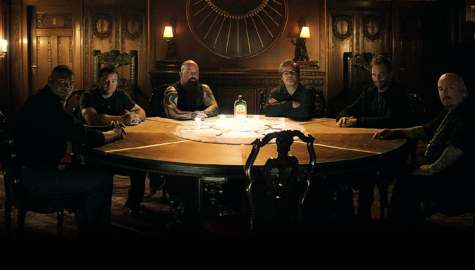 The story of Jägermeister is one of incredible growth and success. This iconic brand has earned its position as the #1 selling imported cordial in America and eighth largest-selling premium spirit worldwide without leveraging what most in the category have for years — television advertising. On May 3, this will change. Jägermeister, the brand known for pioneering the original bar party with its signature Jägerettes, ground-breaking Tap Machines and category-changing Ice Cold Shots, will debut a powerful and unparalleled television and 360° advertising campaign in the United States.

Jägermeister is a strong drink for strong men, with strong bonds. Seven men at the top of their respective crafts were handpicked and brought together to form the ultimate bond. Each of these men in the Jägermeister "Stronger Bond" commercial not only had to embody the untamed edge of Jägermeister, but they also had to be a part of a group whose success relies on their strong bonds with others — one of the foremost social components of the brand. The bold new television advertising features five-time world champion bullfighter Rob Smets' induction into this pantheon of legends, inclusive of an All-Pro fearless Wide Receiver, Rock Icon, World Champion Boxing Trainer, NASCAR Pit Crew Chief, Famed Street and Tattoo Artist and Big Wave Surfer, as he too has accomplished greatness and earned his Seat at the Table.

"Jägermeister has always been consumed socially. This product was originally developed for, and dedicated to, hunters that have deep connections to their craft and each other. The 'Stronger Bond' campaign triggers stories of this kinship and bonding from the brand's deep history and highlights that bond amongst this exceptional group of men," says Michael Volke, member, executive board, Mast-Jägermeister SE.

"The introduction of this campaign is a milestone for our business as we continue to build Jägermeister in the United States, the largest market in the world," says John Frank, vice chairman of Sidney Frank Importing Company, Inc.

"Everything in this campaign is real. The men, their stories and their bonds are just as authentic as the history and heritage of Jägermeister itself," adds Amanda Blanco, vice president and Jägermeister brand manager at Sidney Frank Importing Company, Inc.