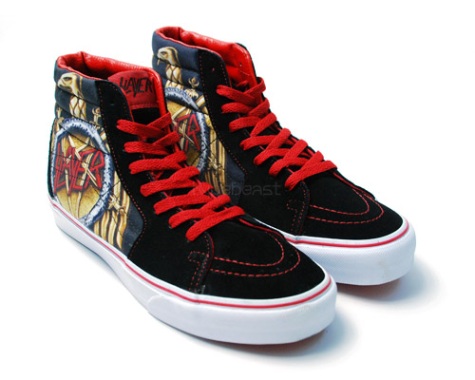 Vans — one of the world's leaders in the shoe and apparel market — and Nice Kicks have teamed up to present Vulcanized Vinyl, a temporary pop-up shop in Austin, Texas during the SXSW (South By Southwest) Music And Media Conference, taking place March 9-18. The retail space will be open noon to midnight at 313 E. 6th Street.

As part of the promotion, Vans — for the first time ever — is reissuing five of its most popular band shoe projects in a first-come-first-served offering from March 13 to March 17.

Make sure you arrive early before store opening at noon so you can cop a pair of reissues from SLAYER (March 13),DESCENDENTS (March 14),BAD RELIGION (March 15),IRON MAIDEN (March 16) and SOCIAL DISTORTION (March 17).

As an added bonus to those who shop with us, Vans is offering a "Concierge Service" and will deliver your purchases to major hotels in Austin so you don't have to trek from venue to venue with your goods.

"Vulcanized Vinyl is a great opportunity to work together with a key boutique partner in Nice Kicks as we uniquely present Vans Classics and California collections and key apparel items in a way that underscores Vans long musical heritage," said Vans Vice President of Marketing Doug Palladini. "We think that SXSW's rabid music crowd will really love the band collaboration re-releases we have on tap."