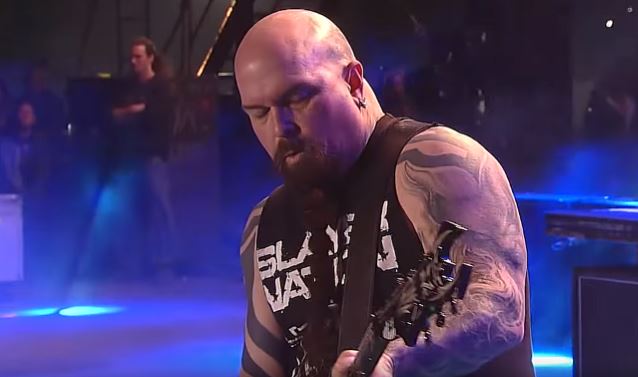 SLAYER's KERRY KING: 'I Don't Have An Endgame In Mind'

In a brand new interview with Miami New Times, SLAYER guitarist Kerry King was asked if he thought, back when he co-founded the band in 1981, he would still be doing this 35 years later. He responded: "No, because back when we started in '81, '82, 'old' had a different meaning me to back then. Old was 55, and I'm past that and I don't feel old. Things hurt worse than when I was 25, but the SLAYER shows are still epic. So back then, absolutely not. If Jeff [Hanneman, late SLAYER guitarist] was alive, he'd say, we used to do it for chicks and beer, and I didn't drink beer, so we did it for chicks. [Laughs]"

Asked if he ever thinks about the final chapter for SLAYER, King said: "I don't have an endgame in mind. That being said, I don't want to die onstage either. The good news is we've got seven to eight songs from the last recording. The lyrics don't make those songs change. They're done, recorded, with the 'Repentless' sound. We've got plenty of stuff — it's just finding time to get in the studio again. [The record label] Nuclear Blast is already bugging me about that, but I don't see that happening until at least late next year or early the following year... It's a wonderful place to be. We've never been this far ahead."

SLAYER frontman Tom Araya recently told Billboard that there are no plans yet for the group to begin work on the follow-up to last year's "Repentless" album. That effort marked the band's first release since the death of Hanneman.

SLAYER's seven-week North American tour with ANTHRAX and DEATH ANGEL kicked off on September 9 in Cleveland.