A brand-new SLAYER album is expected in 2009, but some fans won't have to wait that long to get an early listen to some of the new music.

Fans who attend any of the upcoming European "Unholy Alliance Tour, Chapter III" dates, will receive the new SLAYER song via an exclusive download card that will also include special material from the entire tour's lineup — SLAYER, MASTODON, TRIVIUM and AMON AMARTH. The download card, along with a limited edition "Unholy Alliance Tour" clothing patch, will be given away free only to ticket holders when they arrive at their local venue the night of the show.

The new SLAYER song is being recorded as you read this, as SLAYER has just entered a Los Angeles-area studio to begin recording the new album. More info on the free song and new album will be announced shortly. In addition, TRIVIUM's "Kirisute Gomen" from their upcoming album "Shogun" (released September 30), and "Guardians of Asgaard", a new gem from AMON AMARTH's "Twilight of the Thunder God" (released September 30), will also be part of the download package. MASTODON opted to do something a little different for their contribution to the tour download — the band will take fans into the recording studio for a first-look and listen to the making of their upcoming album. Plus, a live-in-concert SLAYER performance filmed at the band's 2007 San Diego Sports Arena show will be included in the "Unholy Alliance Tour" download package.

The European leg of the mighty "Unholy Alliance Tour, Chapter III" kicks off in Manchester, England on October 27 and will play more than two-dozen shows over a five week period. A North American leg is being planned for 2009.

"The Unholy Alliance Tour" first launched in fall 2004 with a European edition that featured SLIPKNOT, SLAYER, MASTODON and HATEBREED. The venture was so successful, the first North American trek, dubbed "The Unholy Alliance Tour, Chapter II: Preaching to The Perverted", kicked off in summer 2006 with SLAYER, LAMB OF GOD, CHILDREN OF BODOM, MASTODON, and THINE EYES BLEED stomping and screaming its way to 30 U.S. and Canadian cities. The European run of "Unholy Alliance Tour, Chapter II" took place in fall 2006, featuring SLAYER, IN FLAMES, CHILDREN OF BODOM, LAMB OF GOD, and THINE EYES BLEED.

SLAYER won a Grammy in the "Best Metal Performance" category in the pre-telecast ceremony at the 50th annual Grammy Awards, which was held on February 10 at the Staples Center in Los Angeles. SLAYER was nominated for the track "The Final Six", from the band's 2007 limited-edition "Christ Illusion". The song, written by Araya and guitarist Jeff Hanneman and produced by Josh Abraham, is a chilling look at a hypothesized end of the world. The track made its debut in July 2007 as the "Single of the Week" on MySpace where it had accumulated more than 750,000 plays, an astounding number for a song that received no commercial airplay. 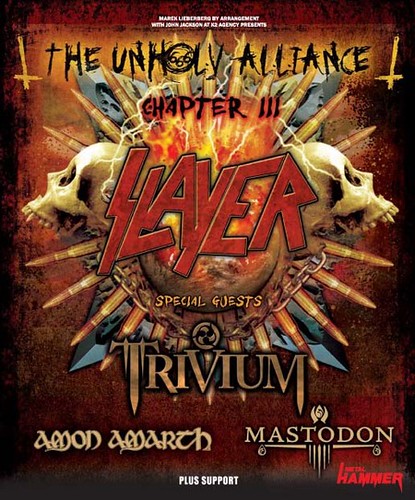