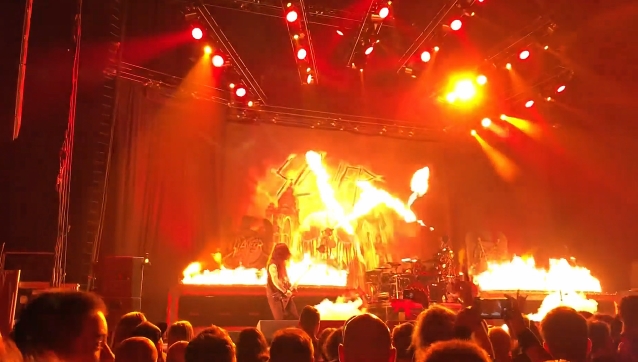 Former MACHINE HEAD and VIO-LENCE guitarist Phil Demmel made his live debut with SLAYER earlier tonight (Monday, December 3) at the Royal Arena in Copenhagen, Denmark. Fan-filmed video footage of the concert can be seen below.

After the show, Demmel took to his social media sites to write: "Never has 90 minutes gone by faster. Made a few mistakes but I feel really good about this 1st one. Much love to all of you for the ongoing support."

Demmel is filling in for SLAYER's guitarist of the past eight years, Gary Holt, who announced on Sunday that he would miss the rest of the current SLAYER European trek in order to return home and be with his dying father.

Earlier today, Demmel posted the following message on his social media sites: "Full circle. Karma. It's so crazy how things work out. I got a text less than 24 hours after I played my last MACHINE HEAD note.

"11 years ago (almost to the day),I had to leave a tour to fly home and be with my family when my father passes away. Some amazing dudes stepped in to cover for me and to help the band out.

"I am filling in for a legend who has replaced a legend in a legendary band on their farewell tour.

"Despite the fact that SLAYER is the reason I wanted to play heavy music, it's beyond my utmost honor to [be] asked to do this. Learning 19 songs (not just songs — SLAYER songs) has been a daunting task and I have worked very hard to do Gary and the entire camp proud.

"As we all here send our love and support to Gary Holt as he goes through a life-altering time, the rallying this camp has done is amazing.

"Thank you all for your support as I grab the baton for a few shows and fly the Bay Area flag high on stage right.

"And lastly, the biggest hero is Marta [Phil's wife] for being so selfless after having her partner home for two days, sends him off to follow this crazy dream. All hail the Queen."

Demmel joined MACHINE HEAD a decade after his previous band, VIO-LENCE, broke up; VIO-LENCE being the band that he and Robb Flynn, MACHINE HEAD's lead singer and guitarist, launched together as teenagers. Robb went on to form MACHINE HEAD in 1992 and Phil joined them in 2003.