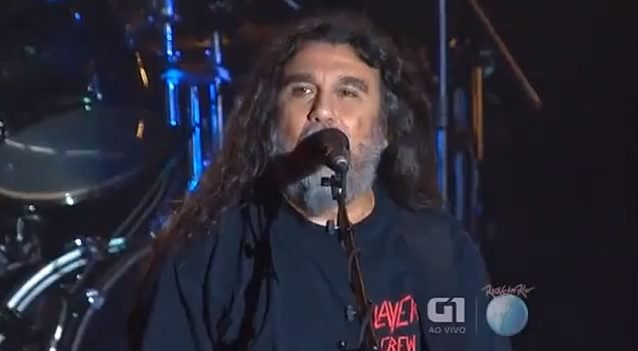 Professionally filmed video footage of SLAYER's September 22 performance at the Rock In Rio fesitval at Cidade do Rock in Rio de Janeiro, Brazil can be seen below.

SLAYER's first show in 25 years at the 3,700-capacity Hollywood Palladium in Los Angeles, set for Monday, October 28, has sold out, and a second show has been added for Sunday, October 27. Tickets are on sale now. Go to Slayer.net for purchasing information.

These concerts are part of SLAYER's 25-date fall 2013 North American tour that kicks off on October 22 in Anchorage, Alaska. SLAYER — Tom Araya on bass/vocals, guitarist Kerry King, drummer Paul Bostaph, and guitarist Gary Holt, who continues to fill in for the late founding member Jeff Hanneman — will have GOJIRA and 4ARM support on all dates.

"Really looking forward to playing a full-blown headline set across North America," said Kerry King. "Haven't done that in a fuck of a long time — must be like seven years — so prepare for the assault of a SLAYER headline tour. We are!"

While still recovering from the devastating loss of Hanneman, Araya and King have begun to work on new material and hope to spend some time in the studio prior to this tour.

Original SLAYER drummer Dave Lombardo sat out the band's Australian tour in February/March due to a contract dispute with the other members of the group. Filling in for him was Jon Dette (TESTAMENT, ANTHRAX).