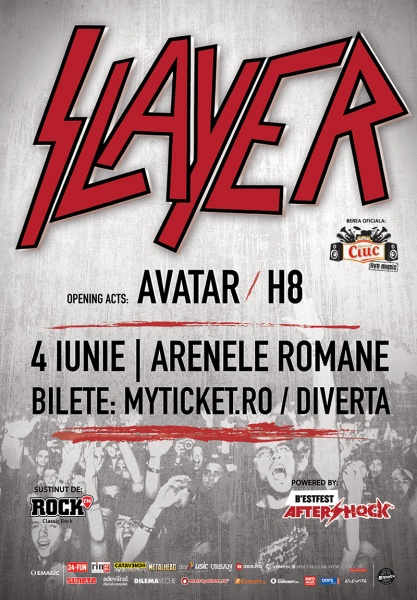 MTV's "Alternative Nation" conducted an interview with SLAYER guitarist Kerry King when the band performed in Romania on June 4 in front of more than 3,000 people at Arenele Romane in Bucharest. You can now watch the chat below.

When asked about SLAYER guitarist Jeff Hanneman's current state of health (Jeff in January 2011 contracted necrotizing fasciitis, likely caused by a spider bite, and has been undergoing surgeries, skin grafts and intense rehab since),King said, "Jeff is… If you look at him, he looks fine. But playing the intricate things that we do, he's not ready to do that. He doesn't know if he has the stamina for an hour-and-fifteen-minute set. He can play any of the slower stuff and do it just like the record. But we made a name for ourselves, historically, for being good live, so we had to make the decision and say, 'You've gotta get better before you try to come back. If you come back, make it a special thing, not just an adequate thing.'"

King also spoke about SLAYER's rumored plans to release a two-song EP this summer, possibly to coincide with the band's appearance at the Rockstar Energy Drink Mayhem Festival. "[The two new SLAYER tracks] are done, but they're just not mixed," he said. "It's [like], do you put them out now or do you just wait for the [full-length] record to be done [and include them as part of the final package]? We're gona finish the record September-October. So I, myself, would rather wait, because I don't like to put those two songs out and then include them on the record. In my thinking, if you put those two songs out, then make ten more songs and put those two on that album just as an afterthought. But I feel like I've gotta give people ten new songs. That's why on the last one [2009's 'World Painted Blood'] we did 11, 'cause 'Psychopathy Red' was already out. So [the two new songs are] done. We'll see what the record company proposes. I think they've been talking about an EP, which is kind of a throwback to the '80s, which is really cool, I think. But we'll just have to see."

A SLAYER Bucharest concert photo gallery can be found at Metalhead.ro.

Speaking to U.K.'s Metal Hammer magazine, Kerry described the new SLAYER songs as "really refreshing and energetic." He added, "One thing I can tell you is that the songs are shaping up in the classic SLAYER style. You won't be hearing us doing acoustic stuff. [laughs]"

EXODUS guitarist Gary Holt is filling in for Hanneman on SLAYER's summer tour, which kicked off last month at All Tomorrow's Parties in England.

SLAYER's latest album, "World Painted Blood", sold 41,000 copies in the United States in its first week of release to debut at position No. 12 on The Billboard 200 chart.