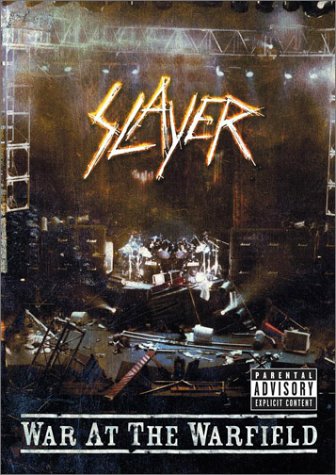 SLAYER have posted the track "Raining Blood", taken from their forthcoming DVD, "War At the Warfield", in Windows Media format at their official web site. Check it out: High-Speed, Low-Speed.

"War At The Warfield" (view cover here),due on July 29 through UMVD (Universal Music & Video Distribution),was recorded at San Francisco's The Warfield on Dec. 7, 2001 during the band's "God Hates The World" tour. It marks one of the last live appearances with the group of drummer Paul Bostaph, who announced his departure from the band shortly before Christmas 2001 due to a "chronic elbow injury." Bostaph has since joined San Francisco Bay Area metallers SYSTEMATIC, who issued their sophomore album, titled "Pleasure To Burn", in April through Elektra Records.

In addition to the live footage, "War at the Warfield" will include the uncensored "Bloodline" video plus a 50-minute "Fans Rule" documentary in 5.1 Surround Sound & Stereo.

The complete track listing for the DVD is as follows:

In other news, SLAYER guitarist Kerry King will be making a personal appearance on Saturday, August 16 at 7:00 p.m. at Looney Tunes in West Babylon, New York and on Sunday, August 17 at 4:00 p.m. at Vintage Vinyl in Fords, New Jersey. Please head to vvinyl.com for further details.

As previously reported, SLAYER have been tapped to headline the Fall 2003 edition of the Jagermeister Music Tour, scheduled to kick off in October. More details, including the names of the bands that will make up the rest of the bill, will be announced soon. SLAYER's new studio album, the follow-up to 2001's "God Hates Us All", is due in early 2004. The much-anticipated SLAYER box set, "Soundtrack To The Apocalypse", will also surface soon.