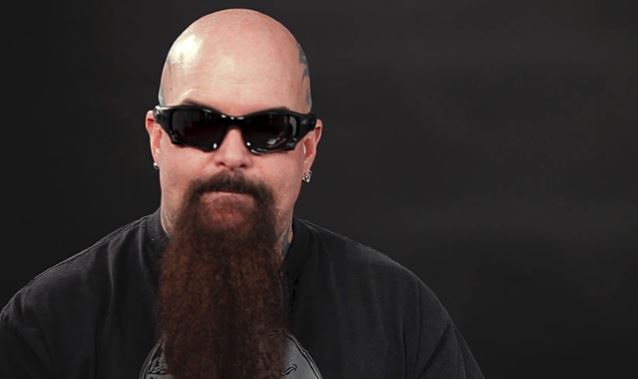 In a brand new interview with The Village Voice, SLAYER guitarist Kerry King said that he doesn't feel the the spirit of his longtime friend and band co-founder Jeff Hanneman is guiding the group two years after Jeff's untimely death.

"Jeff is worm food," King said. "When you die, you go in the dirt. There is no doubt. Doubt's called agnostic. I'm not agnostic."

"I didn't know this until Tom [Araya, singer/bassist] told me recently," King said of the track. "I didn't talk to Jeff about that song, because I didn't really have to police Jeff. If he wrote it, I was pretty sure it was all right. It was about sometime in World War II, because he was a big World War II history buff. I don't know the exact instance, but apparently the Germans would hang people from buildings by piano wire as a warning to people not to go against them. That’s a very general description."

King refers to the "Repentless" title track as "the Hannemanthem." He told The Village Voice: "I went with it based on SLAYER. SLAYER is repentless; SLAYER's always been repentless. I said, 'You know what, I should write something about how I think Jeff looked at the world, because he looked at the world exactly how SLAYER looked at the world.' Plus little 'Jeff-isms.' It was both easy and difficult. The difficult part was doing it justice; I didn' want to just throw it together. I wanted it to be solid, as deep as it could be without getting personal."

Hanneman, who passed away in May 2013 from alcohol-related cirrhosis of the liver, is credited for writing many of SLAYER's classic songs, including "Angel Of Death" and "South Of Heaven".

In the August 2013 issue of Guitar World magazine, King spoke about the personal relationship he had with Hanneman. He said: "[Any time we would finish a tour, Jeff] would just go home and detach. He might have lived only 45 minutes away, but unless you were part of his inner circle, it was hard to stay in touch with him. And it took me a few years to understand that. For a while I was just like, 'Why isn't this guy calling me back?' But as I got older, I just realized that that was who Jeff was."

"I don't think Jeff and I were ever best friends," continued King. "I think we were probably the closest in the band, but never best friends. To put it in a way that everyone could understand, Jeff and I were like business partners. Was he my friend? Of course he was my friend. But we didn't really act like that. The last time I was at Jeff's house was January 2003. We went to his place to watch the Raiders in the playoffs. And it sounds horrible, but it wasn't horrible. That was just how it was."