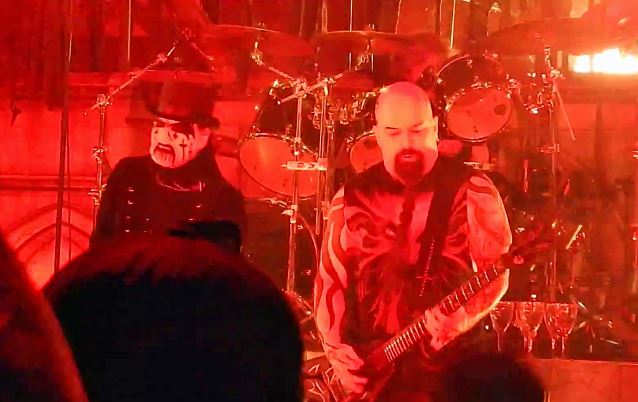 Fan-filmed video footage of Kerry's appearance can be seen below.

Said King Diamond: "Kerry, it was an absolute honor to share the stage with you!"

Kerry King has previously stated that he and fellow original SLAYER guitarist Jeff Hanneman were big fans of MERCYFUL FATE when SLAYER recorded the album "Hell Awaits", so much so that the LP was very influenced by the Danish heavy metal act.

Asked by Full Metal Jackie if he feels at all uncomfortable when fans share the impact MERCYFUL FATE had on them, King Diamond said: "It's great to hear. I mean, I was very lucky the other day. I went and saw my friends in VOLBEAT play here in Dallas. And ANTHRAX was supporting. I met [ANTHRAX guitarist] Scott Ian before, but I met all of [the ANTHRAX guys] this time around and got to really talk to them. And what an amazing bunch of guys. I mean, really great human beings — nice people. It was amazing. And they just played and put on an amazing show. So it was a very good evening, and it was great to meet [them]. And they also were talking about: 'Hey! Let's do [MERCYFUL FATE's] 'Evil'.' [And I said] 'Okay, I can do 'Evil' in my sleep, so we can do that, if you want to.' And then one of the other guys said: 'Hey, there's a little more to it than just that.' It can quickly go wrong if you have not tested it properly. So some other time we'll do it. But I remember, the drummer [Charlie Benante] said that he could play the entire 'Melissa' album, if need be. So it's nice to hear that people are really that into that old music still."