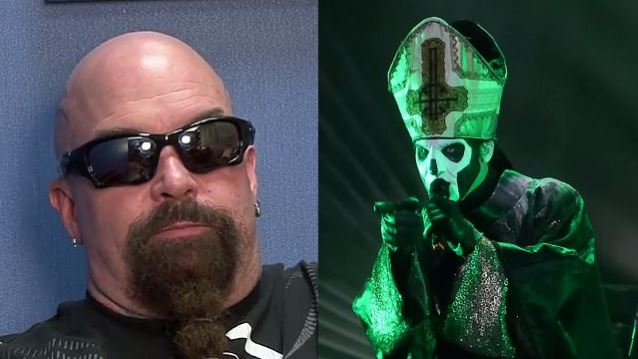 SLAYER's KERRY KING On GHOST: 'I Love The Imagery, I Just Hate The F**king Music'

In a recent interview with Artisan News, SLAYER guitarist Kerry King was asked for his opinion of the Swedish occult rockers GHOST, who share management with SLAYER and have toured with King's band in the past.

"Dude, I love the imagery… I love it," King responded (see video below). "I just hate the fucking music. I like them [as people]. You know, they've been on many tours with us. I just… I can't [get into their music]. And I tried. I wanna like 'em, and I can't. I got their CD from Brian Slagel from Metal Blade. It was when Gary Holt [EXODUS guitarist] first started playing with us, and I picked up Gary. And I'm, like, 'Brian said this is awesome, man.' So we put it in, going to practice. It wasn't awesome. It wasn't awesome for me. It wasn't awesome for [Gary] either. I'm, like, 'Well, maybe the first song sucks.' [Laughs] And we went to the next one. It's just not for me. I know GHOST is hugely popular, and I'm very happy for their popularity. And, like I said, [they're] the nicest guys you'll ever meet. It's just not my music. And I've tried so hard. [Laughs]"

Due on September 11, SLAYER's new CD, "Repentless", will mark the band's first effort without both co-founding guitarist Jeff Hanneman, who passed away in 2013, and original drummer Dave Lombardo, who was fired from the group earlier that same year.