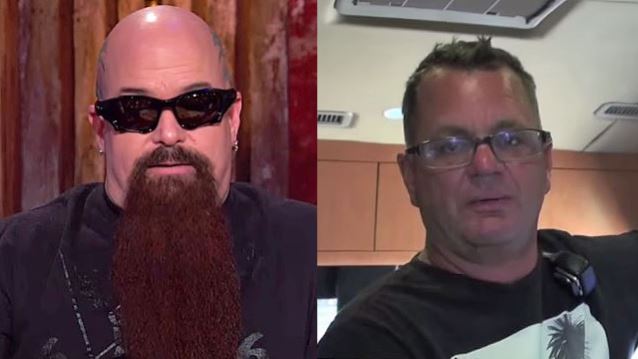 SLAYER guitarist Kerry King has slammed Kevin Lyman over comments the co-founder of the annual Rockstar Energy Drink Mayhem Festival made regarding the state of the heavy metal scene and the future of the traveling event.

In an article published on July 8 by Detroit Free Press, Lyman was quoted a saying about the difficulties of booking headline-worthy acts for the festival: "The bands at the top all demand a certain level of fee to be on tour. Unlike punk rock, metal never knows how to take a step back to move the whole scene forward. That's how punk rock was. That's how we nurtured punk rock. BAD RELIGION would take a little less than they could on their own to bring the whole scene forward, so we could make sure we had a good [touring] package around them. Metal doesn't seem to have that concern, never has, never has since I was working in the clubs in the '80s. It's always about a 'me, me, me' thing."

Lyman added that part of the problem is the fact that metal's audiences have dwindled as the established headlining acts got older. "What happened was metal chased girls away because what happened was metal aged," he said. "Metal got gray, bald and fat. And metal was about danger. When you went to a metal show, it was dudes onstage; there was some danger in it."

During a brand new interview with Howie D. from Hard Edge Radio and National Rock Review, King was asked to respond to Lyman's comments. Kerry said (hear audio below): "What a douche. I do care [about what he said], because that directly affects this product [referring to the Mayhem festival]. But at the end of the day — let me say this — when you think of the old and fat and [bald]… Okay, I got the 'bald' part — I get it — but, I mean, when you think of that statement, do you think of me, or are you thinking fucking Lyman? Dude, I look like a fucking convict; I'm not here looking all old, fat and gray, you know?! It's, like, c'mon, man, speak for yourself. Don't put that label on us, the genre and your festival or anything. That's just fucking… That's one of the stupidest marketing things I've ever heard. It's not marketing. It's just somebody babbling."

Lymanrecently apologized for the remarks he made in the Detroit Free Press interview, explaining that "I was never talking about Mayhem — I was talking about metal scene as a whole." He added: "It costs lots of money and energy to drive the tour, plus it has been a challenge to work with larger acts who will sell the bulk of tickets to these-sized venues while we still have the responsibility to deliver performances by the up-and-comers, who are the headliners of tomorrow."