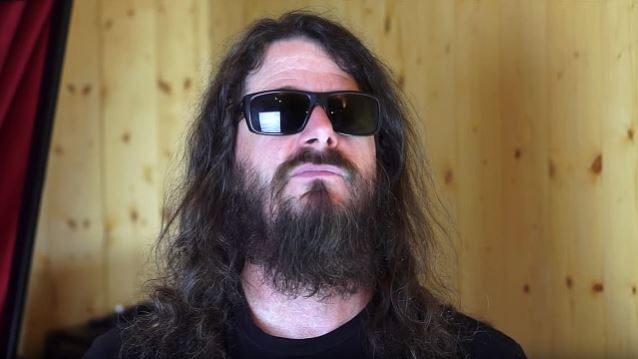 LoudTV.net conducted an interview with SLAYER drummer Paul Bostaph before the band's October 26 concert in Paris, France. You can now watch the chat below.

Asked about the official press release that was issued by the SLAYER camp in December 2001 that listed a chronic elbow injury as the reason for Bostaph's last departure from the band, Paul said: "[I didn't leave] because of my health. I'm back. I've always been healthy. I mean, it's funny that there's so many questions about my health. I've always played sports, and through playing sports, I've sustained injuries. I don't know too many people who play sports that don't. I'm a very competitive person in everything I do — drums, sports… whatever that is. And through playing sports… I've played soccer and injured my left knee. I don't know too many people that eventually don't tear their ACL [anterior cruciate ligament]. So, anyway, my ACL injury turned into an elbow injury turned into a foot injury turned into, 'What's wrong with your right ear?' It's all the rumors… I get questions from people, 'So, I hear your right hand hurts.' Or 'your left finger.'The bottom line is, I'm healthy."

Regarding whether guitarist Gary Holt brings something fresh to the SLAYER sound, Bostaph said: "I wouldn't say… It's hard to say… If you say it's something fresh… Just say that it's something new or something different. But the thing with Gary is that Gary was there at the beginning with SLAYER and MEGADETH and METALLICA and EXODUS . So he's original, an original ganster, O.G. So it's funny… To call it fresh, it's kind of like looking back on Jeff [Hanneman, late SLAYER guitarist] and saying that it was old, and it wasn't. This is just a new… It's a new lineup. It's obvious. But I guess the best to put it is it's a pleasure playing with him."

SLAYER's new album, "Repentless", was released on September 11 via Nuclear Blast. The follow-up to 2009's critically acclaimed, Grammy-nominated "World Painted Blood" was produced by Terry Date, who has previously worked with PANTERA, DEFTONES and SOUNDGARDEN. The artwork was created by Brazilian artist Marcelo Vasco in collaboration with the band's Tom Araya and Kerry King.