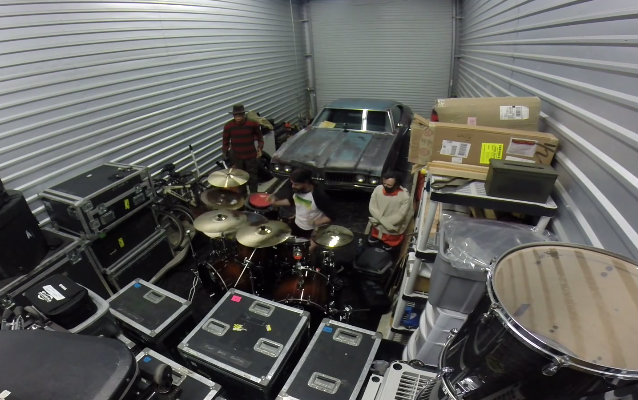 Video footage of SLAYER drummer Paul Bostaph warming up and practicing in his home studio can be seen below.

SLAYER recently returned to the studio to resume recording its new album for a tentative early 2015 release. Helming the sessions is Terry Date, who previously worked with the band on the song "Implode", which was made available as a free download as a "thank you" to the band's fans for their continued support following SLAYER's surprise performance at this past April's Revolver Golden Gods awards in Los Angeles.

Joining guitarist Kerry King and bassist/vocalist Tom Araya during the sessions for SLAYER's new album are returning drummer Paul Bostaph, who replaced Dave Lombardo last year, and guitarist Gary Holt (also of EXODUS), who has been filling in for Jeff Hanneman on tour for the past four and a half years.

Bostaph was SLAYER's drummer from 1992 until 2001 and recorded four albums with the band — the gold-certified "Divine Intervention" (1994), the 1996 punk covers album "Undisputed Attitude", "Diabolus In Musica" (1998), "God Hates Us All" (2001) that received a Grammy nomination for "Best Metal Performance", as well as the DVD "War At The Warfield" (2001), also certified gold. In addition to SLAYER, Bostaph has been a member of FORBIDDEN, EXODUS, SYSTEMATIC and TESTAMENT.