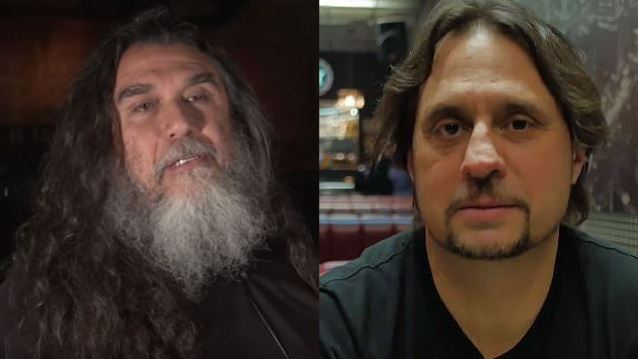 SLAYER's TOM ARAYA: DAVE LOMBARDO 'Was Beginning To Put Us In A Really Bad Light'

SLAYER frontman Tom Araya has "set the record straight" with regards to the latest departure of the band's original drummer, Dave Lombardo, explaining that the group "had to move forward" because Dave "was beginning to put us into a bad spot."

Lombardo released a statement in February 2013 revealing that he "discovered 90 percent of SLAYER's tour income was being deducted as expenses, including the professional fees paid to management, costing the band millions of dollars and leaving 10 percent or less to split" among the four members of the group. He added: "In my opinion, this is not the way a band's business should operate. I tried rectifying it by letting my bandmates know, and Tom and I hired auditors to figure out what happened, but I was denied access to detailed information and the necessary backup documents. I was told that I would not be paid until I signed a longform contract which gave me no written assurance of how much or on what basis management would deduct commissions, nor did it provide me access to the financial budgets or records for review. It also forbade me to do interviews or make statements having to do with the band, in effect a gagging order."

In a brand new interview with The Skinny, Araya spoke about the circumstances that led to Lombardo's 2013 exit from SLAYER. He said: "I'm just going to set the record straight on that. Going back a long time now, fifteen years nearly, we were looking for somebody to sit in for Paul Bostaph — that's how long ago it started with Dave. Paul decided to move on, but he stuck with us until we could find a replacement. Dave said, 'Yeah, I'll sit in for a tour or two,' and in the process of doing that, we drew up a contract for Dave, because that's what you've got to do — make sure everybody's taken care of, everybody's happy. We came up with a simple agreement that lasted a while, and then we were in the process of trying to make it better for Dave, because after so many years of playing with us, you figure, well, shit — we should redo this, we should figure out how we can make it better for Dave. We came up with a deal and he basically was getting everything he wanted, but it was a three-year term, and three years into that, we still hadn't been able to get him to sign it."

He continued: "We had some obligations that came up and when you're given an ultimatum or put on the spot, you have to do something, so we moved forward, and Dave got really upset. We went back to him again and told him that if he signed the deal, we could move forward, but he had other plans, so we made a phone call to him and ended it, because he was beginning to put us into a bad spot. We managed to find somebody to sit in, we went off to play in Australia and Dave went on a rant and told a lopsided story, and we let him talk and do what he does best."

Araya added: "I hate to say anything bad about him, but he did what he did and we had to move forward. He was beginning to put us in a really bad light, and we didn't want to stop the wheels from turning."