SLIPKNOT has announced a return to the road for its incendiary 2021 incarnation of the "Knotfest Roadshow". Support will come from three Grammy-nominated heavy music luminaries, KILLSWITCH ENGAGE, FEVER 333 and CODE ORANGE.

The 28-date run, produced by Live Nation, kicks off following the band's previously announced Knotfest Iowa hometown show in Des Moines on September 25. The "Knotfest Roadshow"'s first official date happens at Tinley Park, Illinois on September 28, with the tour then snaking its way across the U.S., wrapping up in Arizona in early November.

SLIPKNOT frontman Corey Taylor states: "With the world opening up, it's time to get excited about LIFE again. To get back to LIFE again. This tour is a long time coming and we hope you're as excited to see it as we are to play it. Stay safe, stay (sic) and we'll see you soon."

Twenty-two years ago, nine inspired musicians from Des Moines, Iowa, shattered the scope of what was possible in rock music. From the moment SLIPKNOT emerged in 1999 with their self-titled debut, it was clear they were like nothing the world had seen before. Where a similarly creative act may have burned out or lost their relevance chasing mainstream acceptance, SLIPKNOT has only proven that an enduring commitment to constant evolution, their craft, and their fans can allow a rock band to not only continue — but flourish and push the envelope on what defines heavy metal and rock music in general. With "We Are Not Your Kind", SLIPKNOT's first new album in five years, the band delivered when they were needed most. Meanwhile, SLIPKNOT's annual Knotfest festival has evolved into the biggest hard rock and metal festival in the world, expanding to four continents. Over 550,000 fans have attended these massive festivals, which are as cultural as they are music-based, mixing heavy rock with hip hop, world music, visual art, experiential installations, and much more. Recorded music and live performances aside, SLIPKNOT has always permeated mainstream culture in ways that defy expectations. Recently, SLIPKNOT partnered with Amazon Studios' advertising campaign for their smash hit series "The Boys", and have launched SLIPKNOT No. 9 Whiskey in a partnership with Cedar Ridge Distillery (American Distilling Institute's "2017 Distiller Of The Year"). 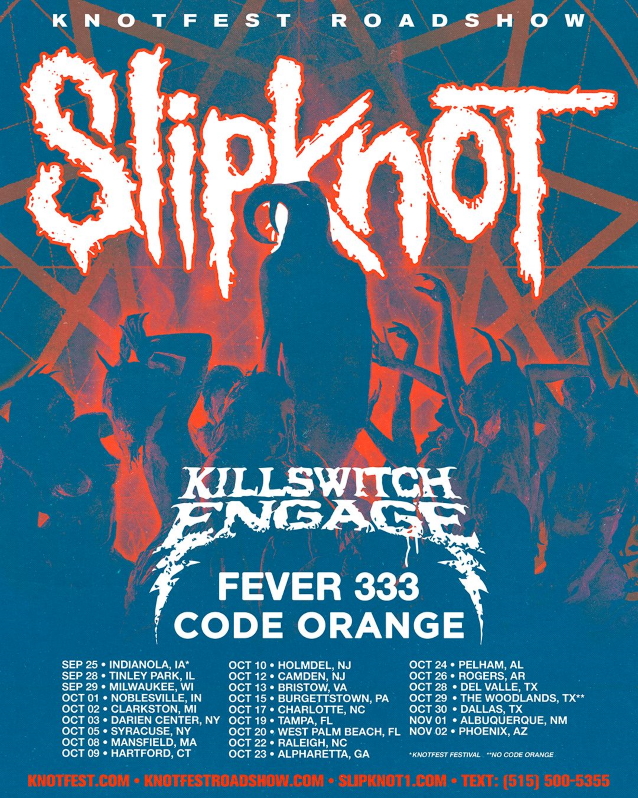