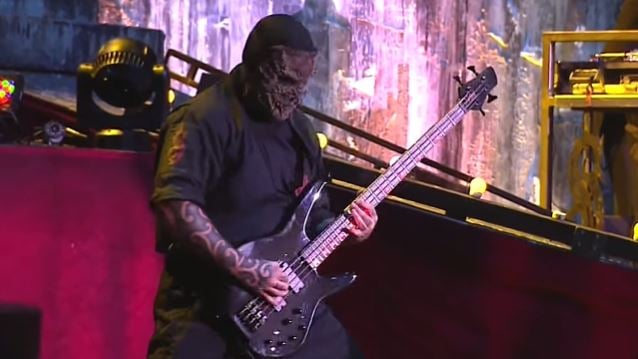 SLIPKNOT was forced to walk off stage several songs into its performance earlier tonight (Sunday, August 2) in Hartford, Connecticut after their bassist, Alessandro "Vman" Venturella, had an unknown medical emergency and was rushed to the hospital. After about a twenty-minute break, SLIPKNOT returned to the stage without Venturella and played the rest of the set as an eight-piece.

Before SLIPKNOT resumed its performance, singer Corey Taylor addressed the crowd, explaining (see video below): "I'm gonna let you know what's going on right now. I'm sorry to say that our bass player, Alex, had… Something happened. I'm not sure what happened. He's been put into an ambulance and he's going to the hospital right now as we speak. But I want you all to make fucking noise for him. Send him some fucking love. Now, we had a choice to come back out here. We've had to modify some shit, but we're gonna keep on playing for you. It's what we want, it's what Alex would fucking want."

SLIPKNOT guitarists Jim Root and Mick Thomson reportedly handled most of the bass duties on the band's latest album, ".5: The Gray Chapter", with some help from Venturella and former touring bassist Donnie Steele. Taylor spoke to the "Talk Is Jericho" podcast about how SLIPKNOT eventually decided to hire Venturella to finish out the record and join the band on the road. He said: "[The way] Vman [came into SLIPKNOT] was a little different [from the way drummer Jay Weinberg did], because we had a couple of people that we were looking at and that we had actually worked with, and it just wasn't vibing. Nothing against them technically — it just wasn't vibing. And I think Jim was actually the one who said, 'For now, let's bring Vman in. He can handle it.' 'Cause the dude is a ripper. A lot of people don't know that. We met him through MASTODON, so we've known him a long time, and Jim knew just how good he was. So he came in, and he just started handling it. And he's so easy to hang out with. He's such a great dude. And it just got better and better and better and better and better. And the question got brought up towards the end of the album. It was, like, 'What are we gonna do live?' And we were, like, 'What do you mean? He's coming with us.' It was a slower burn for him, because we had tried a couple of other people. But it worked so well that it was just, like, 'Okay, this is it.' And then it was trial by fire, 'cause now you're jumping out of the airplane. The first gig was Knotfest in front of 25,000 people. That was their first gig. But it came off, man, and it's just gotten better. It never gets easier, but it's gotten better."