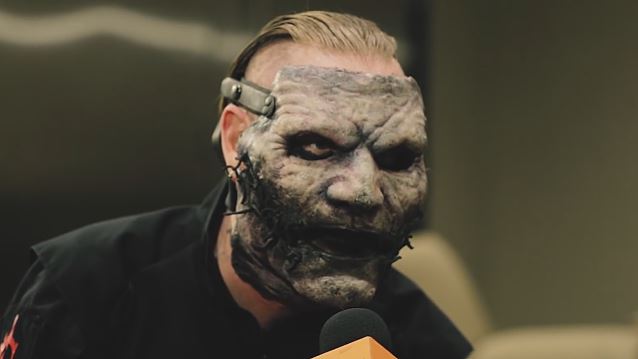 During a recent interview with Aggressive Tendencies, SLIPKNOT frontman Corey Taylor was asked for his opinion of the hugely popular augmented reality mobile game Pokémon Go, which has reportedly been downloaded more than 75 million times since its early July launch. He said: "This Pokémon Go thing… You have to understand, I'm a father, so I've got… my kids are up my ass about it. And my son's out with his cousins right now huntin' them down."

He continued: "I think that, just like everything else we've ever had as far as like a cyber trend, it will peak in about a month and then it'll go away. It's a genius concept, but just like Words With Friends, just like your Candy Crushes and all that crap, what goes up must come down. So we'll just see how long it stays in the zeitgeist right now."

Pokémon Go was developed and distributed by Niantic in which Nintendo owns a 32 percent stake, CNNMoney reported.

According to Survey Monkey, Pokémon Go had 25 million daily active users on July 14, but by July 20, that number had declined to about 22 million. This data suggests that the game may have hit a peak in popularity.

Pokémon Go uses a phone's GPS to determine where in the real world to spawn virtual characters, and then uses the phone's camera and augmented reality to make those characters appear on the screen. As you move around, different and more types of Pokémon will appear, depending on where you are and what time it is. The idea is to encourage you to travel around the real world to catch Pokémon in the game.

Players are rewarded for catching Pokémon characters out in their neighborhoods, at park benches, street corners and local attractions.