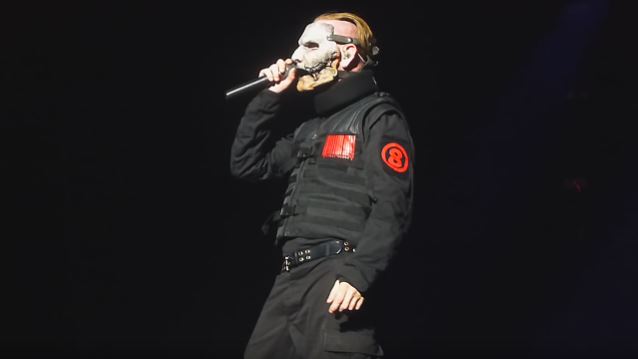 SLIPKNOT frontman Corey Taylor has commented on the incident last week when he had a concertgoer ejected from the band's concert in Toronto. Fan-filmed video footage showed Taylor pointing at someone in the crowd during the show and saying into the mic, "You don't show me shit, you little pussy." Within 15 seconds, security escorted the person out, with Taylor waving and saying, "Bye bye, bitch."

He later called the person a "cunt" on Twitter and explained that he has been "doing this too long to deal with that disrespect."

Speaking to the Q103 radio station in Albany, New York, Taylor said that the person who found himself at the receiving end of the singer's wrath at the July 19 concert was "just a typical idiot. The only thing I can say is he was a troll in a real life, man. He was just showing some serious disrespect; nothing I can say on the radio. But I had watched it… Honestly, what you're seeing [in the video] is the culmination of me trying to ignore it for the entire show and finally getting to the point where I'm, like, 'No. We're not doing this anymore. I've been doing this for twenty years now. I'm not doing that.' So he was gone."

He continued: "The thing that sucked, though, was the girl that was with him was a fan, and she had to leave because he was her ride. So he gets pulled, and he's acting like, 'Oh, I don't know what happened. I don't know why I'm getting kicked out.' I'm, like, 'You're an idiot, and we all know why you're getting kicked out.' And then his girl is, like, 'But… What… I… Okay, I've gotta go.' I mean, I felt bad for her, but, honey, get a better dude. That dude you're with sucks at life."

Corey had a simple explanation for why a supposed "fan" would taunt him at a SLIPKNOT concert. He said: "'Cause you're a punk, and that's the kind of negativity you thrive on. And, honestly, I'm at the age… We're done here. You know? You wanna talk smack? You're gonna get smacked. That's the way it is."

According to The Pulse Of Radio, one user on SLIPKNOT's Reddit page claimed the fan was hurling insults at Corey and flipping him off, while another wrote that the man was attacking people in the crowd for no reason.

Taylor made headlines earlier this month when he smacked the phone out of the hand of a texting fan during a recent SLIPKNOT concert. The singer later explained his action by tweeting, "If you're gonna text, stay home."

Taylor recently discussed his dislike for people using their phones at concerts in an interview with Detroit radio station WRIF, saying, "So many people have their faces glued to their phones... Get off your phones and pay attention to what the hell you're doing."