SLIPKNOT, LINKIN PARK, JUDAS PRIEST Confirmed For Next Year's ROCK ON THE RANGE

Rock On The Range, America's premier hard rock festival, returns to central Ohio's Columbus Crew Stadium May 15, 16 and 17, 2015 for its ninth year with a stellar lineup of top rock bands led by multiplatinum band LINKIN PARK, global rock juggernauts SLIPKNOT and heavy metal legends JUDAS PRIEST — who are currently celebrating their 40th anniversary. The full weekend of non-stop rock will also feature performances from GODSMACK, MARILYN MANSON, BREAKING BENJAMIN, RISE AGAINST, VOLBEAT, SLASH featuring MYLES KENNEDY AND THE CONSPIRATORS, PAPA ROACH, HALESTORM, OF MICE & MEN, ANTHRAX and many more of the world's most exciting bands on three stages over three days, plus the biggest rock n' roll comedians in the Rock On The Range Comedy Tent.

To kick off the Rock On The Range weekend with a laugh, Guitar World and Revolver's Roast On The Range returns to Columbus, Ohio Thursday, May 14. Look for more details to be announced in early 2015 at RoastOnTheRange.com and RockOnTheRange.com. The 2014 Roast featured nearly a dozen musicians and comedians who honored and lampooned SLIPKNOT and STONE SOUR vocalist Corey Taylor in front of a live audience.

The current band lineup for Rock On The Range — fueled by Monster Energy Drink — is as follows:

Corey Taylor of SLIPKNOT says, "It's been way too long since SLIPKNOT has played Rock On The Range … five years is too long. We're coming back with a new album and a new show. It'll feel good to headline again. Everyone, prepare for hell…"

JUDAS PRIEST proclaims, "Rock On The Range brings the PRIEST back to the USA! We can't wait to unleash our metal maniacs #priestfamily once more with our ongoing 40th anniversary 'Redeemer of Souls' world tour."

A specially priced pre-sale for Rock On The Range is available now through Friday, December 5 at 9:59 a.m. ET. Visit www.facebook.com/rockontherange to receive a code to purchase pre-sale tickets now. The Rock On The Range ticket pre-sale offers a limited number of weekend tickets at discounted prices as follows (plus fees):

Regularly priced general admission tickets go on sale Friday, December 5 at 10:00 a.m. ET and will be priced as follows:

These prices will stay in place through late February.

New to Rock On The Range in 2015 will be the Jack Daniel's Old No. 7 VIP Lounge which features amenities such as dedicated WiFi, charging stations, private restrooms, premium food options and more. This upgrade will be available for all ticket purchases for only $125 while supplies last.

"Our mission each year is to widen the net as much as possible while staying true to the core that is Rock On The Range," says Gary Spivack, co-executive producer of Rock On The Range for RockHouse Presents. "Take headliners SLIPKNOT, LINKIN PARK, and JUDAS PRIEST as well as heavyweights GODSMACK, MARILYN MANSON, the welcomed return of BREAKING BENJAMIN, combine that with bands such as RISE AGAINST, OF MICE & MEN, TECH N9NE, YELAWOLF and a rare appearance from the likes of MINISTRY, you then get the world that is Rock On The Range. A music festival… where ROCK (of all kinds) lives." 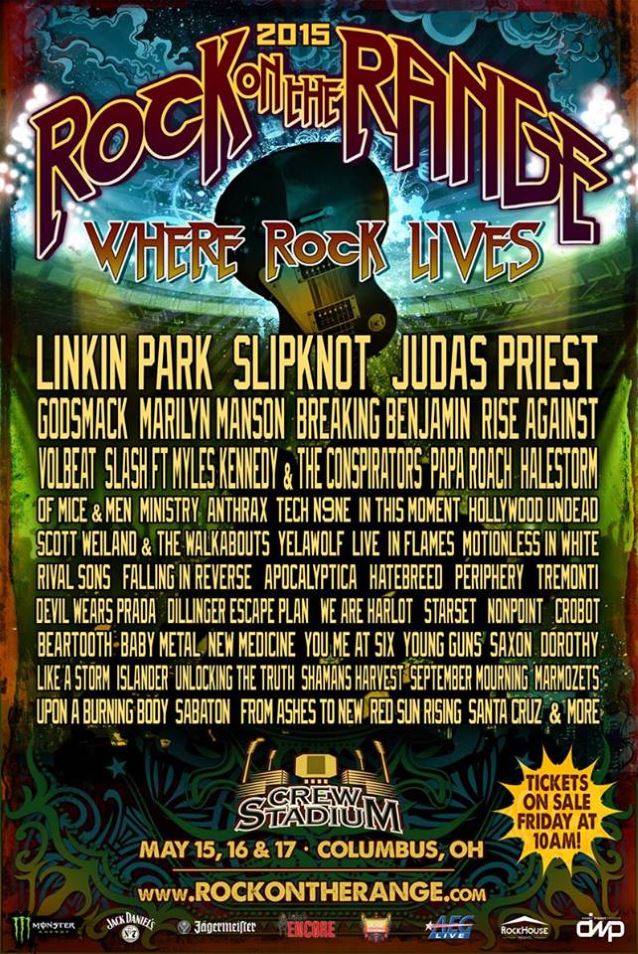